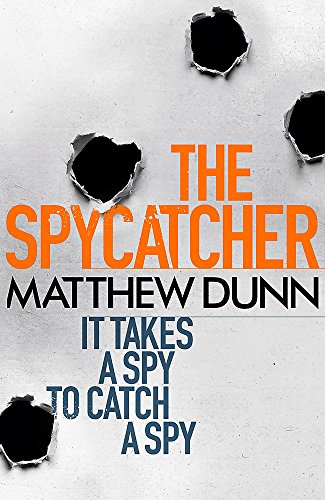 The Spycatcher by Matthew Dunn

The Spycatcher by Matthew Dunn

Its existence is no more than a rumour - a ghost force unbound by rules. Deniable, and devastatingly effective, MI6's Spartan Section is the West's last line of defence. And super-spy Will Cochrane is their most prized asset - and deadliest weapon.

When intelligence reveals the trace of a terrorist mastermind, Cochrane is dispatched to hunt him down and prevent an attack that apparently has only one objective: Armageddon.

In a world where trust is precious, betrayal cheap, and violent death the ultimate price to pay, Will Cochrane has never been outplayed by his enemies ... so far.

[Published in hardback as SPARTAN]

Like le Carre and Fleming before him Dunn is the real thing, a former member of SIS turned fictional chronicler of the secret world. His though is a more muscular creation than Smiley, or even Bond. Meet Will Cochrane, a one man weapon of mass destruction; 007 is a cocktail-sipping lush compared with Cochrane * DAILY TELEGRAPH *
Great talent, great imagination, and real been-there done-that authenticity make this one of the year's best thriller debuts. Highly recommended * LEE CHILD *
A nail-biting, edge of your seat page-turner. Matthew Dunn is an explosive new talent * SIMON KERNICK *
A terrific thriller with a superb new hero. Written by a man with the credentials to back him up... oozes class. Bond and Bourne can take a back seat... * MATT HILTON *
Plenty of fireworks, a suitably anguished 21st-century hero and snappy tradecraft make this an intelligent and entertaining summer read. But what really gives [it] the edge is the author: Matthew Dunn is a highly commended former MI6 field operative ... and the first to write a thriller. This feels solid and authentic * FINANCIAL TIMES *
Excellent ... I know of no other spy thriller that so successfully blends the fascinating nuances of the business of espionage and intelligence work with full-throttle suspense storytelling * JEFFERY DEAVER *
Readers will want to see more of Dunn's distinctive hero, "the ultimate killer of killers" * PUBLISHERS WEEKLY (US) *
This debut novel has the ring of verisimilitude ... no nonsense, pulse-pounding ... readers will want to spend more time in the company of Matthew Dunn's tough agent Will Cochrane * CRIMETIME *
Dunn, a former M16 officer, fashions a hero who looks poised to give Lee Child's Jack Reacher a run for his readers ... a twisty, cleverly crafted work * KIRKUS REVIEWS (USA) *
I made the mistake of starting Dunn's novel at 10 o'clock last evening. In no time flat my mind was trapped by the turns of this intense thriller ... this is one of the most startling thriller debuts I've encountered * THE RAP SHEET *
A thriller with fast action, a great villain, several twists and turns, and enough ambiguity to escape the many obvious pitfalls of genre cliche ... the book pushes forward relentlessly * IRRISTIBLE TARGETS *
Matthew Dunn was trained by SIS in all aspects of intelligence collection and direct action, including agent running, deep-cover deployments, small-arms, explosives, military unarmed combat, surveillance, anti-surveillance, counter-surveillance, and covert communications. He used his skills extensively on operations. Although typically he worked alone, he also had significant experience of working with highly specialised units from the SAS and SBS as well as conducting joint-operations with MI5, GCHQ and the CIA. Medals are never awarded to modern MI6 officers, but Dunn was the recipient of a very rare personal commendation from the Foreign Secretary for actions that directly influenced the successful conclusion of a major international incident. He lives in England.
GOR011215883
9781409121299
1409121291
The Spycatcher by Matthew Dunn
Matthew Dunn
Used - Like New
Paperback
Orion Publishing Co
2012-08-16
432
N/A
Book picture is for illustrative purposes only, actual binding, cover or edition may vary.
The book has been read, but looks new. The book cover has no visible wear, and the dust jacket is included if applicable. No missing or damaged pages, no tears, possible very minimal creasing, no underlining or highlighting of text, and no writing in the margins
Trustpilot