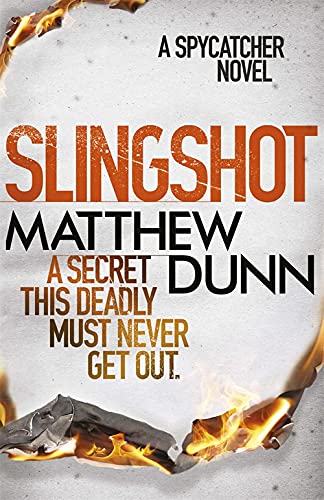 Will Cochrane monitors the nighttime streets of Gdansk, Poland, waiting for the appearance of a Russian defector, a man bearing a top-secret document. Will believes the defector is about to step out of the cold and into the hands of Polish authorities, but suddenly everything goes sideways. The target shows up, but so does a team from the Russian foreign intelligence service SVR, and they are hell-bent on keeping the man from walking. Then, in a hail of crossfire, a van speeds into the melee and snatches the defector out from under them all. Everyone wants the man and the codes he carries - but now he's gone and it's up to Will and his CIA/MI6 team to find him before the Russians do.

Will tracks both the missing Russian and his kidnappers, believing the defector has his own warped agenda. But soon it's apparent that the real perpetrator could be someone much more powerful: a former East German Stasi officer who instigated a supersecret pact between Russian and US generals almost 20 years ago. An agreement, which if broken for any reason, was designed to unleash the world's deadliest assassin.

Then Will learns that the Russians have tasked their own 'spycatcher' - an agent just as ruthless and relentless as Will - to retrieve the document. Now Will knows that he faces two very clever and deadly adversaries, who will stop at nothing to achieve their aims.

Like le Carre and Fleming before him, Dunn is the real thing...His, though, is a more muscular creation that Smiley, or even Bond. Meet Will Cochrane, a one-man weapon of mass destruction * DAILY TELEGRAPH *
An intelligent and entertaining summer read...solid and authentic * FINANCIAL TIMES *
I know of no other spy thriller that so successfully blends the fascinating nuances of the business of espionage and intelligence work with full-throttle suspense storytelling * Jeffrey Deaver *
A terrific thriller with a superb new hero...Bond and Bourne can take a back seat * Matt Hilton *
Matthew Dunn was trained by SIS in all aspects of intelligence collection and direct action, including agent running, deep-cover deployments, small-arms, explosives, military unarmed combat, surveillance, anti-surveillance, counter-surveillance, and covert communications. He used his skills extensively on operations. Although typically he worked alone, he also had significant experience of working with highly specialised units from the SAS and SBS as well as conducting joint-operations with MI5, GCHQ and the CIA. Medals are never awarded to modern MI6 officers, but Dunn was the recipient of a very rare personal commendation from the Foreign Secretary for actions that directly influenced the successful conclusion of a major international incident. He lives in England.
GOR006447133
9781409121312
1409121313
Slingshot by Matthew Dunn
Matthew Dunn
Spycatcher
Used - Very Good
Paperback
Orion Publishing Co
2015-02-12
416
N/A
Book picture is for illustrative purposes only, actual binding, cover or edition may vary.
This is a used book - there is no escaping the fact it has been read by someone else and it will show signs of wear and previous use. Overall we expect it to be in very good condition, but if you are not entirely satisfied please get in touch with us
Trustpilot