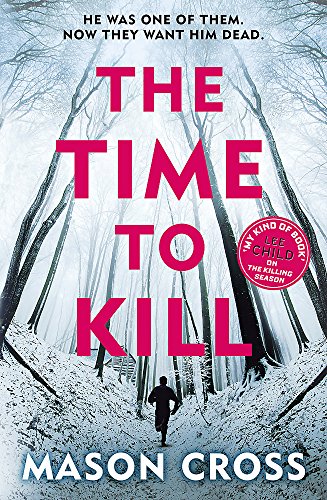 The Time to Kill by Mason Cross

The Time to Kill: Carter Blake Book 3 by Mason Cross

It's been five years since Carter Blake parted ways with top-secret government operation Winterlong. They brokered a deal at the time: he'd keep quiet about what they were doing, and in return he'd be left alone.

But news that one of Blake's old allies, a man who agreed the same deal, is dead means only one thing - something has changed and Winterlong is coming for him.

Emma Faraday, newly appointed head of the secret unit, is determined to tie up loose ends. And Blake is a very loose end. He's been evading them for years, but finally they've picked up his trace. Blake may be the best there is at tracking down people who don't want to be found, but Winterlong taught him everything he knows. If there's anyone who can find him - and kill him - it's them.

It's time for Carter Blake to up his game.

High-stakes action, blistering tension and a deadly game of cat and mouse, THE TIME TO KILL is the must-read new thriller from Mason Cross.

Praise for high octane thriller, THE TIME TO KILL:

My kind of book.

* Lee Child *
The Time To Kill is an exhilarating and absorbing thriller making good use of fast-paced action, scenes of tension and convincing characters. -- Crime Review
One of the most interesting "loner" heroes to have arrived in recent years ...Told with pace and vigour by a writer who seems to have a natural aptitude for thrillers, it is not to be missed. * Daily Mail *
An American setting, universal themes, top-class writing, Scottish author - it's a recipe that makes a deadly impact in this impressively sharp debut. Action fans rejoice, there's a new name on the Scottish thriller squad. He plays fast, he plays dirty and, with this calibre of high-octane action, he'll definitely be taking prisoners. * Daily Record *

Mason Cross was born in Glasgow in 1979. He studied English at the University of Stirling and currently works in the voluntary sector. He has written a number of short stories, including 'A Living', which was shortlisted for the Quick Reads 'Get Britain Reading' Award. He lives in Glasgow with his wife and three children.

GOR007632670
9781409159643
1409159647
The Time to Kill: Carter Blake Book 3 by Mason Cross
Mason Cross
Carter Blake Series
Used - Very Good
Paperback
Orion Publishing Co
2016-06-30
416
N/A
Book picture is for illustrative purposes only, actual binding, cover or edition may vary.
This is a used book - there is no escaping the fact it has been read by someone else and it will show signs of wear and previous use. Overall we expect it to be in very good condition, but if you are not entirely satisfied please get in touch with us
Trustpilot