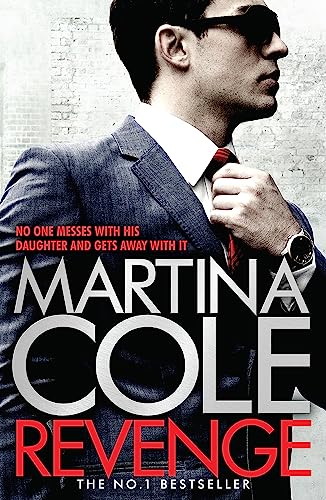 REVENGE: Martina Cole's stories expose a world that many would rather ignore.

Revenge: A pacy crime thriller of violence and vengeance by Martina Cole

He thought he was invincible. He was wrong.

REVENGE by the 'undisputed queen of crime writing' (Guardian) and Sunday Times No.1 bestseller Martina Cole is an unflinching novel that exposes a world that many would rather ignore...

Michael Flynn is untouchable. He's the boss of a dangerous empire, the biggest the criminal world has ever seen. No one crosses him, no one gets in his way, and everyone does what he says - including the law.

But you don't get to where Michael is without making enemies. Someone is out for revenge. And it's best served when least expected.

For more novels that will take you deep into the dark and dangerous criminal underworld, check out Martina Cole's THE GRAFT, THE BUSINESS and THE LIFE

Martina Cole is the acknowledged queen of crime drama with more than twenty novels to her name, of which over a dozen have been No.1 bestsellers. Several of Martina's novels have been adapted for the screen, including The Take and The Runaway which were shown on Sky 1 to remarkable reviews. In addition, Two Women and The Graft have been adapted for the stage; both were highly acclaimed when performed at the Theatre Royal Stratford East, which also staged Dangerous Lady in 2012, celebrating twenty years since Martina's debut novel was published. Martina Cole is a phenomenon. She continues to smash sales records with each of her books, which have sold thirteen million copies. In 2011 Martina surpassed the GBP50 million sales mark since records began and was the first British female novelist for adult audiences to achieve this - and she has spent more weeks in the No. 1 slot on the original fiction bestseller list than any other adult novelist. Her hard-hitting, uncompromising and haunting writing is in a genre all its own - no one writes like Martina.
GOR010470261
9780755375639
0755375637
Revenge: A pacy crime thriller of violence and vengeance by Martina Cole
Martina Cole
Used - Like New
Paperback
Headline Publishing Group
2014-04-24
624
N/A
Book picture is for illustrative purposes only, actual binding, cover or edition may vary.
The book has been read, but looks new. The book cover has no visible wear, and the dust jacket is included if applicable. No missing or damaged pages, no tears, possible very minimal creasing, no underlining or highlighting of text, and no writing in the margins
Trustpilot