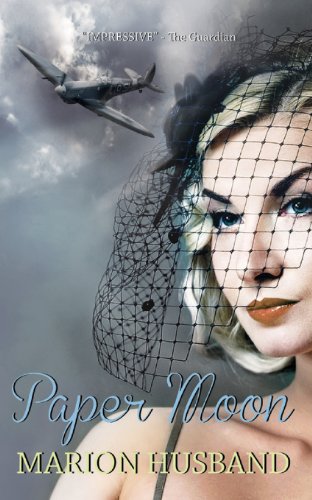 From the writer of the highly acclaimed novel The Boy I Love, Paper Moon explores the complexities of love and loyalty against a backdrop of a world transformed by war.

Paper Moon: The Boy I Love Trilogy by Marion Husband

Jason pays for Bobby to learn to fly and at the outbreak of the Second World War, he joins the RAF and becomes a fighter pilot. Nina marries a Canadian pilot who is killed in 1940, just before the birth of their child, Joan. Bobby steps in to take care of Nina and Joan but in 1944 Joan dies and Bobby is shot down, suffering terrible burns to his hands and face. No longer the beautiful young man of Jason's photographs, in 1946 Bobby returns to hide himself away in the house he's inherited from his grandfather in Thorp, his relationship with Nina destroyed by grief and Nina's reactions to his disfigurement. In Thorp, Bobby meets Jane, an unhappily married schoolteacher. Trying to get over Nina, slowly, Bobby falls in love with this gentle, older woman, believing that she is the only person who sees beyond his injuries.

In London, Nina meets Mick Morgan, now a very famous poet and playwright. She also meets Hugh, Mick's son, and Nina and Hugh begin a passionate love affair. However, Hugh and Bobby were childhood friends whose friendship ended bitterly. Through Nina, Hugh and Bobby become rivals, a rivalry that is complicated by Mick and the mysterious figure that returns to England from Morocco to confront Bobby with the truth about his past.

Paper Moon is a passionate love story that also explores how the sins of the fathers can have far-reaching effects on the sons.

"the writing is intelligent, and the emotions heartfelt". -- Sally Zigmond * Historical Novel Society *
'A real page-turner' * New Books *
Its evocation of quiet lives, intensely lived, is impressive -- The Guardian * Nicholas Clee *
Marion Husband is a compassionate and compelling writer exploring the complexities of human nature with great empathy. Her poetry, short stories, and novels have won prizes, including the best-selling The Boy I Love series which was awarded the Andrea Badenoch Fiction Award and The Blackwell Prize. She has an MA in Creative Writing and has taught creative writing for many years for the Open University and has lectured on Creative Writing MA courses in Newcastle and Teesside Universities. Marion is married with two grown up children and lives in Norton in the Tees Valley.
GOR006204234
9781908262745
1908262745
Paper Moon: The Boy I Love Trilogy by Marion Husband
Marion Husband
The Boy I Love Trilogy
Used - Very Good
Paperback
Accent Press Ltd
2012-09-27
336
N/A
Book picture is for illustrative purposes only, actual binding, cover or edition may vary.
This is a used book - there is no escaping the fact it has been read by someone else and it will show signs of wear and previous use. Overall we expect it to be in very good condition, but if you are not entirely satisfied please get in touch with us
Trustpilot