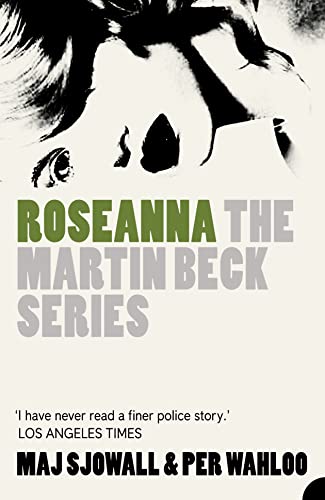 Perennial launch the classic Martin Beck detective series from the 1960s - the novels that have inspired all crime fiction written ever since.

Perennial launch the classic Martin Beck detective series from the 1960s - the novels that have inspired all crime fiction written ever since.

Widely recognised as the greatest masterpieces of crime fiction ever written, these are the original detective stories that pioneered the detective genre and inspired writers from Agatha Christie to Henning Mankell and Graham Greene to Jonathan Franzen. Translated into 35 languages, they have sold over 10 million copies around the world.

Written in the 1960s, they are the work of Maj Sjowall and Per Wahloo - a husband and wife team from Sweden. The ten novels follow the fortunes of the detective Martin Beck, whose enigmatic, taciturn character has inspired countless other policemen in crime fiction. The novels can be read separately, but do follow a chronological order, so the reader can become familiar with the characters and develop a loyalty to the series. Each book will have a new introduction in order to help bring these books to a new audience.

'Roseanna' begins on a July afternoon, the body of a young woman is dredged from Sweden's beautiful Lake Vattern. Three months later, all that Police Inspector Martin Beck knows is that her name is Roseanna, that she came from Lincoln, Nebraska, and that she could have been strangled by any one of eighty-five people.

With its authentically rendered settings and vividly realized characters, and its command over the intricately woven details of police detection, 'Roseanna' is a masterpiece of suspense and sadness.

'The writing is elegant and surprisingly humorous - if you haven't come across Beck before, you're in for a treat.' Guardian

'The decalogue about the Swedish Chief Inspector Martin Beck created by Maj Sjowall and Per Wahloo during the 1960s and 1970s are indeed classic police fiction. They changed the genre. Whoever is writing crime fiction after these novels inspired by them in one way or another.' Henning Mankell

'Their mysteries don't just read well; they reread even better. Witness, wife, petty cop or crook - they're all real characters even if they get just a few sentences. The plots hold, because they're ingenious but never inhuman.' New York Times

Per Wahloeoe was born in Goeteborg, the son of Waldemar and Karin (Svensson) Wahloeoe. After graduating from the University of Lund in 1946, he worked as a journalist, covering criminal and social issues for a number of newspapers and magazines. In the 1950s Wahloeoe was engaged in radical political causes, activities that resulted in his deportation from Franco's Spain in 1957. After returning to Sweden, he wrote a number of television and radio plays, and was managing editor of several magazines, before becoming a full-time writer.
Maj Sjowall is a poet. She lives in Sweden.

GOR001583275
9780007232833
0007232837
Roseanna (The Martin Beck series) by Maj Sjowall
Maj Sjowall
The Martin Beck series
Used - Very Good
Paperback
HarperCollins Publishers
2006-08-07
288
N/A
Book picture is for illustrative purposes only, actual binding, cover or edition may vary.
This is a used book - there is no escaping the fact it has been read by someone else and it will show signs of wear and previous use. Overall we expect it to be in very good condition, but if you are not entirely satisfied please get in touch with us
Trustpilot