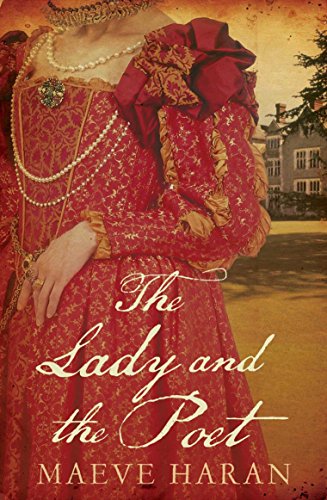 The Lady and the Poet by Maeve Haran

The Lady and the Poet by Maeve Haran

Ann More and her four sisters have been brought up in the beautiful country house of Loseley, near Guildford in Surrey, by their grandparents, Sir William and the Lady Margaret More. Their only brother, Robert, lives with his pompous father and shrewish step-mother nearby. But though the sisters are close, it is Ann who is the most unusual in character. Wilful, argumentative, challenging and fiery, she is handsome rather than beautiful, and has an indomitable spirit. It is this that endears her to her grandfather, who encourages her learning and lets her loose in his well-stocked library to browse the volumes of Latin and Greek.

Once her favourite sister Bett is married, Ann is sent to live in York House in London, where her uncle is Lord Keeper of the Seal. Ann knows her father is endeavouring to find her a match in marriage, and she is to be presented at the Court of Queen Elizabeth yet the journey past Nonsuch Palace, through Southwark, the city gates spiked with the heads of recent traitors and across the shining river proves unimaginably exciting. Soon, Ann is quite at home at York House, and there, in the company of her young cousin, she meets the poet John Donne, a man older and wiser than her, whose verse and character she just cannot resist.

Rich in period detail, vivid in description and character, THE LADY AND THE POET is an utterly irresistible, compelling historical novel. It is, above all, the passionate story of the love match between one of the most famous poets of all time, and his young bride.

Maeve Haran is an Oxford law graduate, former television producer and mother of three grown-up children. She started her writing career with the international bestseller, Having It All, which explored the dilemmas of balancing career and motherhood. Her recent novel, The Time of Their Lives, is a must-read for anyone who wasn't born yesterday and isn't ready to grow old. Her books have been translated into twenty-six languages, and two have been shortlisted for Romantic Novel of the Year. She lives in North London with her husband and a very scruffy Tibetan terrier.
GOR001225632
9780330462464
0330462466
The Lady and the Poet by Maeve Haran
Maeve Haran
Used - Very Good
Paperback
Pan Macmillan
2009-04-03
512
N/A
Book picture is for illustrative purposes only, actual binding, cover or edition may vary.
This is a used book - there is no escaping the fact it has been read by someone else and it will show signs of wear and previous use. Overall we expect it to be in very good condition, but if you are not entirely satisfied please get in touch with us
Trustpilot