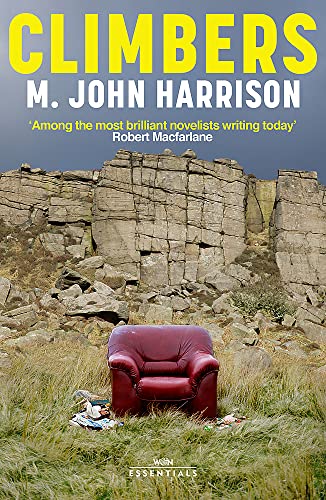 The beloved cult classic from the winner of the 2020 Goldsmiths Prize: a novel of life-changing moments, incredible descriptions of landscape and the power of an obsession.

Climbers: With an introduction by Robert Macfarlane by M. John Harrison

'No one alive can write sentences like he can. He's the missing evolutionary link between William Burroughs and Virginia Woolf' Olivia Laing

'Among the most brilliant novelists writing today' Robert Macfarlane

'Truly gets to the heart of that strange, indefinable otherness of the wild northern landscape' Benjamin Myers

Retreating from the ruins of his marriage, Mike leaves London for the wildness of the Yorkshire moors, where he falls in with a group of climbers - a band of misfits and mavericks bound by the pursuit of the unattainable: the perfect climb.

Travelling from abandoned urban quarries to misty, lichened crags, Mike discovers an intensity of experience - a wash of pain, fear and excitement - that causes the rest of his world to recede. Increasingly addicted to the adrenaline, folklore and camaraderie of the sport, he begins to lose his grip on the line between passion and obsession - at a cost.

With an introduction by Robert Macfarlane

M. John Harrison has abjured the high-pitched melodramatics of TOUCHING THE VOID for a microscopically observed novel about a group of climbers . . . Descriptions of the various climbs are painstaking and suspenseful, and Harrison has a sharp ear for dialogue. But most impressive is his acute sense of place . . . the raw beauty of the Pennines * Daily Telegraph *
Stunning . . . Harrison makes an intensely poetic and evocative brew of the interstices between sport, passion and obsession. Moments of exquisite surreality rub against others in which you can smell the soil and stone * The Times *
More than anything I've ever read, Climbers truly gets to the heart of that strange, indefinable otherness of the wild northern landscape, and the odd people compelled to conquer it in their own odd ways. It feels more than book - it's an adrenalized dream, a series of moods as changeable as the sky above. Unique is the only word for it * Benjamin Myers *
Harrison draws the reader on by the clarity of his vision and writing . . . The way he handles the sport and the social background bears comparison with that of David Storey in THIS SPORTING LIFE. I know no higher praise * Independent *
Sheer brilliance -- Iain M. Banks
A vivid, restless, deeply cunning novel * Sunday Times *
A poetic portrait of the strange and fascinating, very niche world of rock climbing * Helen Mort, author of Black Car Burning *
Like prose poetry, it's beautiful -- Harriett Gilbert
Reading Climbers today it's not just the incredible sense of a place and part and time of England that is so vividly done, but also the warm, complicated drawing of its people. As soon as I finished the book I missed, deeply, all that odd little gang with their obsession and their jargon and their pastime. Harrison's book is fossil and debris, with the qualities of both stone - pure, clean, hard, and the strange uncanniness that comes with finding a bottle top, say, that takes you back to a past decade * Will Burns, author of The Paper Lantern *
Future critics will find in his writing a distinct, clear-eyed vision of late-twentieth and early-twenty-first-century life * J.S. Barnes, Times Literary Supplement *
Harrison is a linguistic artist, constructing sentences that wrap and weave like a stream of consciousness without ever breaking focus * Sci-Fi Now *
Harrison is without peer as a chronicler of the fraught, unsteady state we're in * Guardian *
If fiction's greatest achievement is in affecting the way the reader sees the world, then Harrison's spare and beautiful prose has conjured up here a feeling of almost permanent dislocation from the routines of everyday life. Even when the book has been closed, it's a feeling that is incredibly hard to shake off * The Herald *
[A] masterpiece . . . celebrated for its fine-grained depictions of the landscapes of Northern England through the seasons . . . Harrison is a psychological novelist whose fascination with trauma, repression and memory remains constant throughout his work. Climbers - the great hinge in Harrison's career - is a novel-length attempt to view the past so clearly you can see the beard-frost * London Review of Books *
Over the past 50 years, M. John Harrison has produced a remarkably varied body of work . . . He is not easily pigeon-holed - an intentional state of affairs, but one that has denied him a large readership . . . When he moves into less exotic terrain, he's able to make everyday experiences feel alien - the best example being his 1989 novel Climbers, set in the Pennines among misfits who claw their way up crags, escaping one kind of precariousness by chasing another . . . The prose ripples with mystery and lustrous turns of phrase, and there are flashes of humour, too . . . The landscapes are part J.G. Ballard, part Iain Sinclair . . . Equally at ease depicting suburban midlife crisis and parallel universes, Harrison writes memorably about people who are bewildered, sidetracked, trapped or on the lookout for opportunities to change * The Spectator *
A lot of literary fiction has become its own cliche and it's become very mannered. Of course there's a lot of appallingly bad pulp fiction but when this stuff finds something new and locates itself as part of the tradition it's as good as anything. There are some writers in that tradition in terms of their use of language who as prose stylists are the equal of anyone alive. I'm thinking of people like John Crowley, M John Harrison, Gene Wolfe. * China Mieville, 3AM Magazine *
Magnificently unsettling . . . Harrison described this real, gritty world with the same precise and estranging fluency with which he has more often mapped galactic space, using the dense idiolect of climbing to make atmosphere and geology resonate on an emotional, interior level. Some kind of breach or fault line was being cautiously staked out, a post-industrial, late-capitalist collapse in credit and confidence so amorphous and inarticulable that it would vanish altogether if apprehended too directly. . . . No one alive can write sentences as he can. He's the missing evolutionary link between William Burroughs and Virginia Woolf, bringing together new blooms of language, gathering up advertising copy and internet lingo and arranging them in startling hybrid forms. * Olivia Laing, Guardian *
Michael John Harrison is the author of, amongst others, the Viriconium stories, The Centauri Device, Climbers, The Course of the Heart, Signs of Life, Light and Nova Swing. He has won the Boardman Tasker Award (Climbers), the James Tiptree Jr Award (Light), the Goldsmiths Prize (The Sunken Lane Begins to Rise Again) and the Arthur C. Clarke Award (Nova Swing). He lives in Shropshire.
NGR9781474624923
9781474624923
1474624928
Climbers: With an introduction by Robert Macfarlane by M. John Harrison
M. John Harrison
W&N Essentials
New
Paperback
Orion Publishing Co
2022-05-26
256
N/A
Book picture is for illustrative purposes only, actual binding, cover or edition may vary.
This is a new book - be the first to read this copy. With untouched pages and a perfect binding, your brand new copy is ready to be opened for the first time
Trustpilot