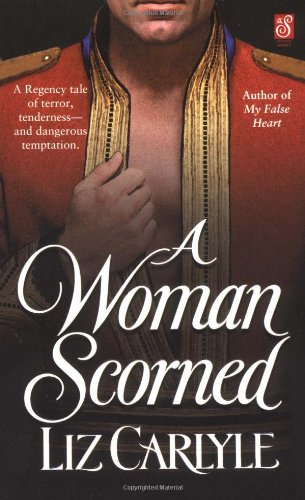 A Woman Scorned by Liz Carlyle

From a "USA Today" bestselling author comes a vivid portrait of passion and intrigue. When a woman consumed by sinister secrets opens the door to a handsome stranger, desire rushes in--followed by a love she never dared imagine.

A Woman Scorned by Liz Carlyle

From its opening scene to its breath-catching climax, Liz Carlyle's newest novel is a vividly etched portrait of passion and intrigue. When a woman consumed by sinister secrets opens the door to a strikingly handsome stranger, a powerful desire rushes in -- and a love she could not have imagined.

Hell hath no fury like a woman scorned, and Jonet Rowland is surely that. But she is also lovely, rich, and -- it is rumored -- an unrepentant adulteress. When her philandering husband, the marquis of Mercer, is murdered in his own bed, it's whispered that Jonet is a femme fatale in more ways than one. Shunned by society, the daring widow steels herself to fight for what truly matters -- her children.
When his scheming uncle begs him to investigate the death of his brother, Lord Mercer, Captain Cole Amherst refuses. But it is soon apparent that treachery stalks two innocent boys, and Cole plunges into the viper's pit that is Jonet Rowland's life. Nothing could have prepared Cole for the lust Jonet inspires. But as danger swirls about them, he is tortured by doubt. Can an honorable soldier open his shuttered heart and let a wicked widow teach him how to truly love?

During her frequent travels through England, Liz Carlyle always packs her pearls, her dancing slippers, and her whalebone corset, confident in the belief that eventually she will receive an invitation to a ball or a rout. Alas, none has been forthcoming. While waiting, however, she has managed to learn where all the damp, dark alleys and low public houses can be found. Liz hopes she has brought just a little of the nineteenth century alive for the reader in her popular novels, which include the trilogy of One Little Sin, Two Little Lies, and Three Little Secrets, as well as The Devil You Know, A Deal With the Devil, and The Devil to Pay. Please visit her at LizCarlyle.com, especially if you're giving a ball.
GOR001606884
9780671038267
0671038265
A Woman Scorned by Liz Carlyle
Liz Carlyle
Used - Very Good
Paperback
Simon & Schuster
2003-07-02
448
N/A
Book picture is for illustrative purposes only, actual binding, cover or edition may vary.
This is a used book - there is no escaping the fact it has been read by someone else and it will show signs of wear and previous use. Overall we expect it to be in very good condition, but if you are not entirely satisfied please get in touch with us
Trustpilot