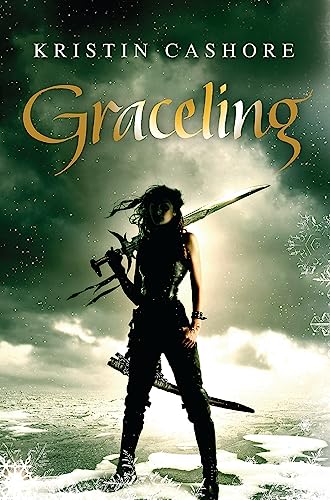 In a world where people born with an exceptional skill, known as a Grace, are feared and exploited, Katsa carries the burden of a skill even she despises: the Grace of killing.

She lives under the command of her Uncle Randa, King of the Middluns, and is expected to carry out his dirty work, punishing and torturing anyone who displeases him. Breaking arms and cutting off fingers are her stock-in-trade. Finding life under his rule increasingly unbearable, Katsa forms an underground Council whose purpose is to combat the destructive behaviour of the seven kings - after all, the Middluns is only one of the Seven Kingdoms, each of them ruled by their own king and his personal agenda for power.

When the Council hears that the King of Liend's father has been kidnapped Katsa investigates ... and stumbles across a mystery. Who would want to kidnap him, and why? And who was the extraordinary Graced fighter who challenged her fighting skills, for the first time, as she and the Council rushed the old man to saftey?

Something dark and deadly is rising in the north and creeping across the continent, and behind it all lurks the shadowy figure of a one-eyed king ...

Cashore's prose is smooth and unobtrusive. But for all its lightness of tone, Graceling is not a simple novel. indeed it deals with some very difficult subject matter. Its inevitable love story is sweetly unconventional and unabashedly feminist. Katsa herself is a rich character. The growth of her trust and self-esteem is the understated heart of the novel. This is always Katsa's story and enjoyable fast paced it is too. An immensely fun, good-hearted read. * SFX *
'Cashore creates believable characters with enough depth, subtlety, and experience to satisfy older readers . . . An impressive first novel. * BOOKLIST *
Graceling really does have something to offer everyone. An adventurous and enjoyable read. * DEATHRAY *
It's a great debut novel that will suit those who like their Fantasy unabashedly romantic. * SFFWORLD.COM *
The story flows at a decent pace with a story that gradually builds in intensity and a mystery that unravels at just the right speed to keep things interesting. Cashore knows what makes a good spectacle and, even though you know that Katsa absolutely has to win through, writes set piece scenes that buzz with excitement and action. * GRAEME'S FANTASY BOOK REVIEW *
A major strength of the writing is the imagery presented throughout the novel. The book is filled with very vivid descriptions of almost everything from castles, landscapes, courts, and the journeys that the characters go on. Kristin Cashore's 'Graceling' is a great start by a developing writer and I definitely look forward to seeing this writer grow with future novels as she shows tremendous potential. * FANTASY BOOK CRITIC *
Kristin Cashore is an award-winning author in the fantasy and YA genre. She has an M.A. in children's literature and has lived in Pennsylvania, Florida, Sydney, Cambridge, Austin, Italy and even London before settling, for the moment, in Boston.
GOR001682105
9780575085305
0575085304
Graceling by Kristin Cashore
Kristin Cashore
Used - Very Good
Paperback
Orion Publishing Co
2009-05-16
400
N/A
Book picture is for illustrative purposes only, actual binding, cover or edition may vary.
This is a used book - there is no escaping the fact it has been read by someone else and it will show signs of wear and previous use. Overall we expect it to be in very good condition, but if you are not entirely satisfied please get in touch with us
Trustpilot