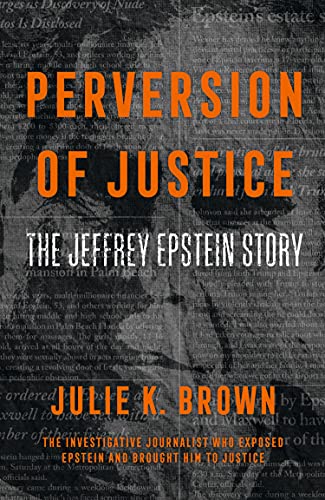 Dauntless journalist Julie K. Brown recounts her uncompromising and risky investigation of Jeffrey Epstein's underage sex trafficking operation, and the explosive reporting for the Miami Herald that finally brought him to justice while exposing the powerful people and broken system that protected him.

Dauntless journalist Julie K. Brown recounts her uncompromising and risky investigation of Jeffrey Epstein's underage sex trafficking operation, and the explosive reporting for the Miami Herald that finally brought him to justice while exposing the powerful people and broken system that protected him.

For many years, billionaire Jeffrey Epstein's penchant for teenage girls was an open secret in the high society of Palm Beach, Florida and Upper East Side, Manhattan. Charged in 2008 with soliciting prostitution from minors, Epstein was treated with unheard of leniency, dictating the terms of his non-prosecution. The media virtually ignored the failures of the criminal justice system, and Epstein's friends and business partners brushed the allegations aside. But when in 2017 the U.S Attorney who approved Epstein's plea deal, Alexander Acosta, was chosen by President Trump as Labor Secretary, reporter Julie K. Brown was compelled to ask questions.

Despite her editor's scepticism that she could add a new dimension to a known story, Brown determined that her goal would be to track down the victims themselves. Pouring over thousands of redacted court documents, travelling across the country and chasing down information in difficulty and sometimes dangerous circumstances, Brown tracked down dozens of Epstein's victims, now young women struggling to reclaim their lives after the trauma and shame they had endured.

Brown's resulting three-part series in the Miami Herald was one of the most explosive news stories of the decade, revealing how Epstein ran a global sex trafficking pyramid scheme with impunity for years, targeting vulnerable teens, often from fractured homes and then turning them into recruiters. The outrage led to Epstein's arrest, the disappearance and eventual arrest of his closest accomplice Ghislaine Maxwell, and the resignation of Acosta.

Tracking Epstein's evolution from a college dropout to one of the most successful financiers in the country-whose associates included Donald Trump, Prince Andrew, and Bill Clinton-Perversion of Justice builds on Brown's original award-winning series, showing the power of truth, the value of local reportage and the tenacity of one woman in the face of the deep-seated corruption of powerful men.

Julie K. Brown is an award-winning investigative journalist with the Miami Herald. Her pursuit of the Jeffrey Epstein sex trafficking story re-opened the case ten years after Epstein's sweetheart deal with then District Attorney Secretary Alex Acosta, resulting in the federal indictments of Epstein and the resignation of Acosta from his post as Labor Secretary under President Trump. For her reporting on Epstein, Brown was awarded the Hillman Prize for Newspaper Journalism, the National Press Club Journalism Institute's Neil and Susan Sheehan award for investigative journalism, the Freedom Forum Institute's Power Shift award, and a George Polk Award in the Justice Reporting category.

GOR011642066
9780008388744
0008388741
Perversion of Justice: The Jeffrey Epstein Story by Julie K. Brown
Julie K. Brown
Used - Very Good
Hardback
HarperCollins Publishers
20210720
464
N/A
Book picture is for illustrative purposes only, actual binding, cover or edition may vary.
This is a used book - there is no escaping the fact it has been read by someone else and it will show signs of wear and previous use. Overall we expect it to be in very good condition, but if you are not entirely satisfied please get in touch with us
Trustpilot