Journey to the Centre of the Earth Jules Verne 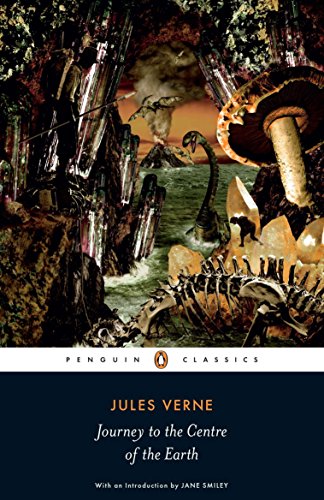 Journey to the Centre of the Earth by Jules Verne

Tells the story of distinguished but eccentric Professor Lidenbrock, who finds a scrap of parchment in an old manuscript. A cipher written in runes, it tells of an entrance to another world - a world hidden beneath our own, illuminated by an electrified gas and populated by strange, prehistoric beings.

Journey to the Centre of the Earth by Jules Verne

Jules Verne's wild and riotous fantasy Journey to the Centre of the Earth delves into the hidden mysteries of a vast, uncharted subterranean world. This Penguin Classics edition is translated from the French by Frank Wynne with an introduction by Jane Smiley and notes by Peter Cogman.

Jules Verne's pioneering science fiction classic tells the story of the distinguished but eccentric Professor Lidenbrock, who finds a scrap of parchment in an old manuscript. A cipher written in runes, it tells of an entrance to another world - a world hidden beneath our own, illuminated by an electrified gas and populated by strange, prehistoric beings. So with his nephew reluctantly in tow, the Professor follows this cryptic clue down into a dormant volcano in Iceland, and the further they descend, the more extraordinary the discoveries and creatures that they encounter, the greater the dangers, and the more ancient the living past that surrounds them.

This new translation by Frank Wynne is accompanied by an introduction on the science of Verne's work and its influences. This edition also includes notes, a chronology and suggested further reading.

Jules Verne (1828-1905), the 'father of Science Fiction' was born in Nantes, developing from early childhood a romantic fascination for the ships and the sea. In 1848 he moved to Paris, ostensibly to become a lawyer, though his true ambition was to become a writer. His first book, Five Weeks in a Balloon (1863) was an immediate popular success, followed a year later by Journey to the Centre of the Earth; among the most popular of the fifty-four books published during his life are From the Earth to the Moon (1865), Twenty Thousand Leagues Under the Sea (1870) and Around the World in Eighty Days (1873).

If you enjoyed Journey to the Centre of the Earth you might like H.G. Wells' The Time Machine, also available in Penguin Classics.

"The reason Verne is still read by millions today
is simply that he was one of the best storytellers
who ever lived."--Arthur C. Clarke

Frank Wynne has been a literary translator for more than a decade and has translated works by, among others, Michel Houellebecq, Ahmadou Kourouma, Petr Kral and Almudena Grandes. He won the 2008 Scott Moncrieff Prize for his translation of Frederic Beigbeder's Love Lasts Three Years, the 2005 Independent Fiction Prize for Frederic Beigbeder's Windows on the World and the 2002 IMPAC prize for Atomised his translation of Michel Houellebecq's Les Particules elementaires.

Jane Smiley is the author of many novels, including Horse Heaven, The Greenlanders, A Thousand Acres, and Ten Days in the Hills, as well as a guide to the Novel, entitled Thirteen Ways of Looking at the Novel. She has won the Pulitzer Prize and been short-listed for the Orange Prize. She lives in California.

Peter Cogman won a Scholarship to read Modern and Medieval Languages at Pembroke College, Cambridge, where he subsequently gained a Ph.D. for research on the work of the 1900s poet and novelist P.-J. Toulet. He taught French at the University of Southampton, and is the author of Narration in Nineteenth-Century French Short Fiction: Prosper Merimee to Marcel Schwob (2002).

CIN000124192
9780141441979
0141441976
Journey to the Centre of the Earth by Jules Verne
Jules Verne
Used - Very Good
Paperback
Penguin Books Ltd
2009-07-30
288
N/A
Book picture is for illustrative purposes only, actual binding, cover or edition may vary.
This is a used book - there is no escaping the fact it has been read by someone else and it will show signs of wear and previous use. Overall we expect it to be in very good condition, but if you are not entirely satisfied please get in touch with us
Trustpilot