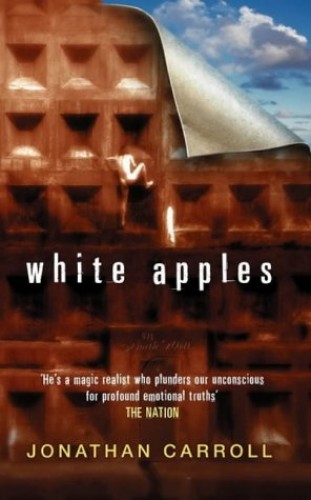 A captivating and constantly surprising tale of life, death, and the realm between.

Vincent Ettrich, an engaging philanderer, discovers that he has died and come back to life -- but he has no idea why, or any memory of the experience. Beset by peculiar omens and strange characters, including a talking rat and an inexplicable tattoo on the neck of his most recent lover, he gradually discovers that he was deliberately brought back by his one true love, Isabelle, because she is pregnant with their son--a child who, if correctly raised, will play a crucial role in saving the cosmic mosaic that is the universe.

But to be brought up right, he must be educated by his own father. Specifically, he must be taught what Ettrich learned on the other side--if only Ettrich himself can remember it!

Tempting and provocative, White Apples is forbidden fruit plucked straight from the orchard of Jonathan Carroll's abundant and legendary imagination.

"Jonathan Carroll is as scary as Hitchcock, when he isn't being as funny as Jim Carrey" STEPHEN KING

" Reading Jonathan Carroll is like watching the" X-Files" or "The Twilight Zone" if the episodes were written by Dostoevski or Italo Calvino." - Pat Conroy " Jonathan Carroll is a master of sunlit surrealism." -- Jonathan Lethem " Jonathan Carroll creates contemporary romances in the literary tradition of Hawthorne and other masters of the form. Fete him, read his books. See him for what he is-- one of our most gifted and intelligent entertainers." -- "The Washington Post"
Jonathan Carroll is the internationally acclaimed author of The Wooden Sea, The Land of Laughs, Bones of the Moon, The Marriage of Sticks, and many other unforgettable books and stories. He lives in Vienna.
GOR001208001
9780330492744
0330492748
White Apples by Jonathan Carroll
Jonathan Carroll
Used - Very Good
Paperback
Pan Macmillan
2004-03-19
352
N/A
Book picture is for illustrative purposes only, actual binding, cover or edition may vary.
This is a used book - there is no escaping the fact it has been read by someone else and it will show signs of wear and previous use. Overall we expect it to be in very good condition, but if you are not entirely satisfied please get in touch with us
Trustpilot