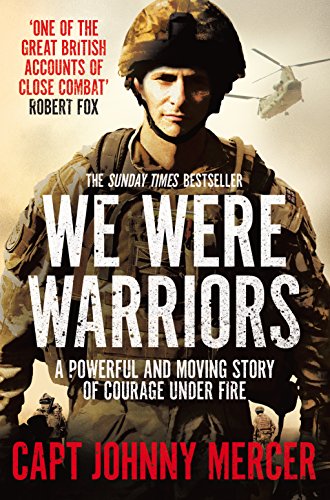 We Were Warriors by Johnny Mercer

The top 10 bestseller - mixing heart-stopping action with powerful insights into the reality of war, this is one man's journey from young commando to a captain with one of the most pressurized and skilled jobs in the army.

We Were Warriors: A Powerful and Moving Story of Courage Under Fire by Johnny Mercer

Unflinching, action-packed and laced with wry humour, Johnny Mercer's We Were Warriors is a compelling read.

'An adrenalin-fuelled, gritty story of heroism on the frontline in Afghanistan' Andy McNab

A captain in 29 Commando, Johnny Mercer served in the army for twelve years. On his third tour of Afghanistan he was a Joint Fires Controller, with the pressurized job of bringing down artillery and air strikes in close proximity to his own troops. Based in an area of northern Helmand that was riddled with Taliban leaders, he walked into danger with every patrol, determined to protect them. Then one morning, in brutal close quarter combat, everything changed . . .

In We Were Warriors Johnny takes us from his commando training to the heat, blood and chaos of battle. With brutal honesty, he describes what it is like to risk your life every day, pushing through the fear that follows watching your friends die. He took the fight back to the enemy with a relentless efficiency that came at a high personal cost. Back in the UK, seeing the inadequate care available for veterans and their families, he was inspired to run for Parliament in the hope he could improve their plight.

This is NOT the stereotypical account of war, it's without doubt the best first hand account in a war zone I've ever read. Brutally honest, humble and written with a pace that could induce a heart attack. Johnny is an MP now; he's what our country needs. A warrior. -- Tom Marcus, ex MI5 Surveillance Officer, author of Soldier, Spy
An adrenalin-fuelled, gritty story of heroism on the frontline in Afghanistan. Going into battle with Johnny and his highly skilled Fire Support Team will have you on the edge of your seat.' -- Andy McNab
A highly-charged, vivid and moving account of frontline combat, and then an even harder fight to honour the sacrifice of so many. Utterly compelling throughout. -- Tom Newton Dunn, Political Editor, the Sun
One of the great British accounts of close combat . . . It is the inner conflict, as much as the closing with a shadowy enemy, that gives the book its edge . . . a remarkable book by a man remarkable in his humanity and courage. -- Robert Fox * Evening Standard *
This is a gripping and honest story of one man's escape from the frying pan of an unhappy childhood into the fire of combat. From the brutal initiation of Sandhurst's Rowallan Company to the killing fields of Afghanistan - it bears testimony above all to the redemptive power of that extraordinary institution, the British Army. -- Mark Urban
His powerful memoir gives a devastating account of the fear, confusion and comradeship of close combat, but is pierced with moments of deep tenderness for both his young family and old comrades. * Daily Mail *
Johnny Mercer served in the British army for twelve years. A captain in 29 Commando, he was deployed on three tours of Afghanistan, and weathered some of the heaviest fighting of the campaign. He left the army in December 2013 with the aim of becoming an MP, in the hope he could improve care for armed forces veterans. He was elected MP for Plymouth Moor View in May 2015 and has since led an inquiry into the treatment of troops by the Iraq Historical Allegations Team. His autobiography We Were Warriors depicts the brutal combat faced by soldiers.
GOR009033330
9781509853021
1509853022
We Were Warriors: A Powerful and Moving Story of Courage Under Fire by Johnny Mercer
Johnny Mercer
Used - Like New
Paperback
Pan Macmillan
2018-02-08
336
N/A
Book picture is for illustrative purposes only, actual binding, cover or edition may vary.
The book has been read, but looks new. The book cover has no visible wear, and the dust jacket is included if applicable. No missing or damaged pages, no tears, possible very minimal creasing, no underlining or highlighting of text, and no writing in the margins
Trustpilot