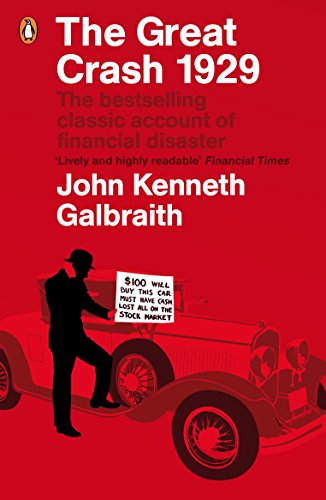 Examines the causes, effects, and long-term consequences of America's infamous financial meltdown, showing how rampant speculation and blind optimism sustained a market mania, and led to its terrible downward spiral. This book describes the people and corporations at the heart of the financial community, and how they were affected by the disaster.

John Kenneth Galbraith's now-classic account of the 1929 stock market collapse, The Great Crash remains the definitive book on the most disastrous cycle of boom and bust in modern times.

The Great Crash 1929 examines the causes, effects, aftermath and long-term consequences of America's infamous financial meltdown, showing how rampant speculation and blind optimism sustained a market mania, and led to its terrible downward spiral. Galbraith also describes the people and the corporations at the heart of the financial community, and how they were affected by the disaster.

With its depiction of the 'gold-rush fantasy' ingrained in America's psychology, this penetrating study of human greed and folly contains lessons that are still vital today - and are now more relevant than ever.

'The definitive work on the subject'
Daily Mail

'A book you will read at a single sitting'
Prospect

John Kenneth Galbraith (1908-2006) was a Canadian-American economist. A Keynesian and an institutionalist, Galbraith was a leading proponent of 20th-century American liberalism and progressivism. Galbraith was the author of 30 books, including The Economics of Innocent Fraud, The Great Crash: 1929, and A History of Economics.

John Kenneth Galbraith, born in 1908, was one of the twentieth century's most influential economists. He produced dozens of books and hundreds of articles on economics, politics, foreign policy and the arts, his most famous including the popular trilogy on economics, American Capitalism (1952), The Affluent Society (1958), and The New Industrial State (1967). He taught at Harvard University for many years and was also active in politics, serving as an adviser to Franklin D. Roosevelt, Harry S. Truman, John F. Kennedy and Lyndon B. Johnson.

James K. Galbraith, born in 1952, teaches at the Lyndon B. Johnson School of Public Affairs, The University of Texas at Austin, and is the author, most recently, of The Predator State: How Conservatives Abandoned the Free Market and Why Liberals Should Too (Free Press).

GOR002468306
9780141038254
014103825X
The Great Crash 1929 by John Kenneth Galbraith
John Kenneth Galbraith
Used - Very Good
Paperback
Penguin Books Ltd
2009-10-29
240
N/A
Book picture is for illustrative purposes only, actual binding, cover or edition may vary.
This is a used book - there is no escaping the fact it has been read by someone else and it will show signs of wear and previous use. Overall we expect it to be in very good condition, but if you are not entirely satisfied please get in touch with us
Trustpilot