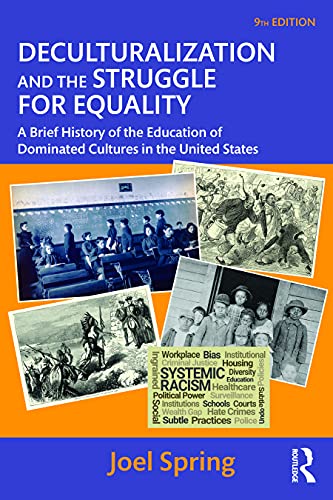 Deculturalization and the Struggle for Equality by Joel Spring (Queens College, USA)

Deculturalization and the Struggle for Equality: A Brief History of the Education of Dominated Cultures in the United States by Joel Spring (Queens College, USA)

In seven concise, thought-provoking chapters, this analysis and documentation of how education is used to change or eliminate linguistic and cultural traditions in the United States looks at the educational, legal, and social construction of race and racism in the United States, emphasizing the various meanings of equality that have existed from colonial America to the present. Providing a broader perspective for understanding the denial of cultural and linguistic rights in the United States, issues of language, culture, and deculturalization are placed in a global context.

Extensively revised throughout to reflect the dramatic national events since the prior edition, the Ninth Edition discusses the rise of the Black Lives Matter movement, increased educational inequality related to the pandemic, concerns about institutional racism and White nationalism, disputes about the interpretation of U.S. history, and debates over cultural and racial identity.

Joel Spring is Professor Emeritus at Queens College and the Graduate Center of the City University of New York, USA.

NLS9781032101576
9781032101576
1032101571
Deculturalization and the Struggle for Equality: A Brief History of the Education of Dominated Cultures in the United States by Joel Spring (Queens College, USA)
Joel Spring (Queens College, USA)
Sociocultural, Political, and Historical Studies in Education
New
Paperback
Taylor & Francis Ltd
2021-11-30
200
N/A
Book picture is for illustrative purposes only, actual binding, cover or edition may vary.
This is a new book - be the first to read this copy. With untouched pages and a perfect binding, your brand new copy is ready to be opened for the first time
Trustpilot