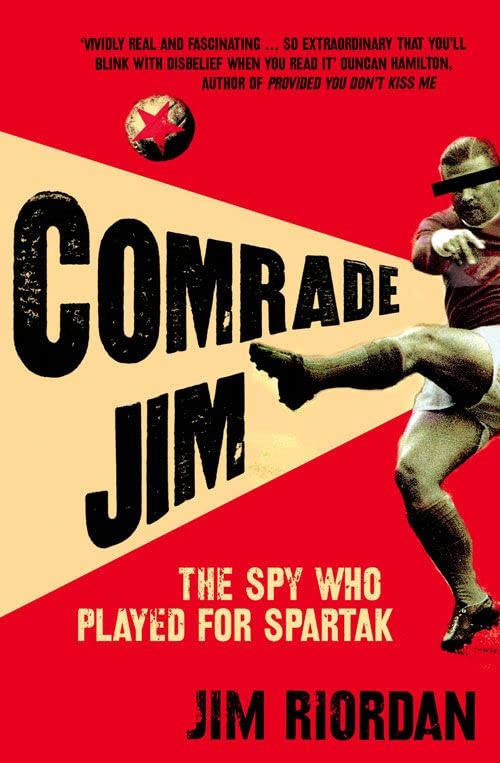 The true and remarkable story of the English double agent who ended up playing for Spartak Moscow.

Comrade Jim: The Spy Who Played for Spartak by Jim Riordan

The true and remarkable story of the English double agent who ended up playing for Spartak Moscow.

Like many working class children growing up in the war, the young Jim Riordan would fantasise his way out of his devastated surroundings with dreams of Wembley and FA Cup glory for his local team, Portsmouth FC. Spartak Moscow, the team he would end up playing for, wasn't even on his radar.

Taught Russian and trained as a spy in the same institution that nurtured the likes of Alan Bennett and Michael Frayn, he was posted to Berlin as part of his National Service to listen in on Soviet military communiques. But, unbeknownst to his seniors, he began mixing with Russian servicemen, mostly through informal kick-abouts, and the passion of these idealistic young men would cultivate his interest in Russian culture, and especially communism, until it blossomed into a full-grown love affair.

From the shambolic outfit that was the British Communist Party in the 1950s, to Cold War Moscow at its coldest, to his friendship with the Cambridge Five and meetings with Brezhnev and Gregarin, and his eventual debut in front of 50,000 Spartak fans at the Lenin Stadium, `Comrade Jim' is the remarkable true story of the only Englishman to have played - and survived - Russian league football, told with grace, humour and lashings of vodka.

An incredible journey of an ordinary man living through extraordinary times.

`His book reads like a Boy's Own thriller and, if you don't follow any other advice I give you, pick this up in a good bookshop near you.' George Galloway, Scottish Daily Record

`Had this wonderful book been a work of fiction it may have been deemed too incredible for publication. It is a genre defying rollercoaster ride.' Sunday Tribune

`An extraordinary tale of cold war era football. This is a man who lived on history's front line, whose story shows what the 20th century's great political shifts meant to individuals.' Jonathan Wilson, FourFourTwo `Best Book'

`This is a timely and engaging look back on a past that really is a foreign country.' Tom Davies, When Saturday Comes

Jim Riordan has been a double bassist, hotel porter, railway clerk, barman, postman, unbreakable tea-set salesman, award-winning children's author, spy and footballer, and is now Professor Emeritus in Russian Studies at the University of Surrey. He lives in Portsmouth with his family.

GOR012495755
9780007251155
0007251157
Comrade Jim: The Spy Who Played for Spartak by Jim Riordan
Jim Riordan
Used - Like New
Paperback
HarperCollins Publishers
2009-04-30
240
N/A
Book picture is for illustrative purposes only, actual binding, cover or edition may vary.
The book has been read, but looks new. The book cover has no visible wear, and the dust jacket is included if applicable. No missing or damaged pages, no tears, possible very minimal creasing, no underlining or highlighting of text, and no writing in the margins
Trustpilot