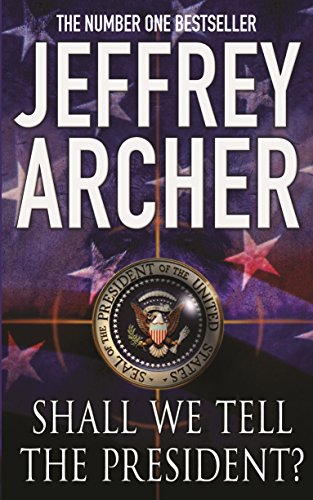 Shall We Tell the President? by Jeffrey Archer

From the world's biggest selling author comes another nail-biting page-turner.

Shall We Tell the President? by Jeffrey Archer

At the end of The Prodigal Daughter, Florentyna Kane is elected President - the first woman President of the United States. At 7.30 one evening the FBI learn of a plot to kill her - the 1572nd such threat of the year. At 8.30 five people know all the details. By 9.30 four of them are dead.

FBI agent Mark Andrews alone knows when. He also knows that a senator is involved. He has six days to learn where - and how. Six days to prevent certain death of the President.

'The only difference between this book and The Day of the Jackal, is Archer is a better writer' Chicago Tribune

'The only difference between this book and The Day of the Jackal, is Archer is a better writer' CHICAGO TRIBUNE 'Here is terror, outrageous and top-notch' VOGUE
Jeffrey Archer is one of the world's most successful authors. He has sold over 500 million copies of his novels and short stories worldwide. After a life in politics he was elevated to the House of Lords in 1992. Archer is married with two children and currently lives in Lincolnshire.
GOR001010256
9780330418966
0330418963
Shall We Tell the President? by Jeffrey Archer
Jeffrey Archer
Used - Very Good
Paperback
Pan Macmillan
2003-07-04
352
N/A
Book picture is for illustrative purposes only, actual binding, cover or edition may vary.
This is a used book - there is no escaping the fact it has been read by someone else and it will show signs of wear and previous use. Overall we expect it to be in very good condition, but if you are not entirely satisfied please get in touch with us
Trustpilot