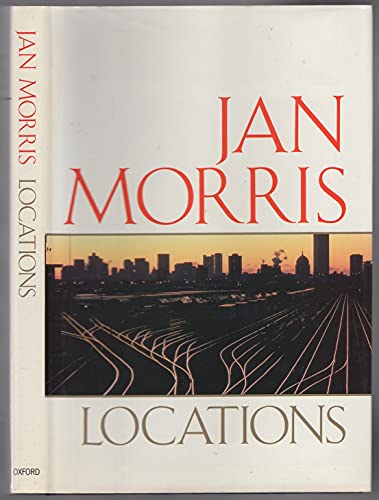 A collection of 18 travel essays, with destinations ranging from Berlin to Honolulu, Chicago to Canberra. Jan Morris' aim is not so much to tell readers how a place looks, or feels, or sounds, but to present her own individual response to it at a particular moment - a wanderer's response.

From San Jacinto Plaza in El Paso, to nostalgic Oslo, to Norfolk Island, home of the Boobook Owl, Locations is an honest and insightful look at thirteen unique places from the woman who has, in her own words, been earning her living "by perpetual wandering and writing" for nearly forty years. One of the world's preeminent travel writers, Jan Morris is the author of a number of highly acclaimed volumes. And now, in Locations, she presents yet another collection of provocative essays on destinations as varied as Paris and Oslo, West Point and Chicago.
These pieces reveal not so much how a place looks, feels, or sounds, but Morris's own response to a particular moment, her appreciation of history's causes and effects, her sharp eye for a telling detail, and her ability to find the meaning in a chance encounter. In Vermont, ("the receptacle of the symptoms Romantics like to identify as American Innocence") she retells with delight how, like the keys to a city, she was given the gift of a piece of lead piping from which the stallion Justin Morgan (the father of the breed of Morgan horses) had drunk. She finds Oaxaca (pronounced like "wa-HA-ka") colored violently by its Indianness, where one can hear the arcane languages of the Mixtec, Zapotec, and Ixcatec, and, five thousand feet above sea level, get a benign and hallucinatory effect of breathiness and romance. Morris captures what she calls the pungency of the Tex-Mex frontier, where one can not only find clans (who have lived there since before Texas was born) that maintain their immemorial feuds on both sides of the Rio Grande, but also such unexpected settlers as a "blond and smiling Swiss lady, like someone out of a Renoir" in charge of her breakfast counter in Laredo, and a multilingual world-traveller who prefers Texas to his homes in France and Italy. And we experience the mood in post-Wall Berlin, where "the awful fear that used to hang over the Wall like a black cloud" has vanished, and "the soldiers of the People's Army have turned out to be human after all."
The Los Angeles Times praised Morris as "poet of the odd point of vantage." And in Locations we find a vivid tapestry of evocative prose from the woman who has brought to travel writing a style that is arrestingly her own.
About the Author
Jan Morris is the author of numerous books including Among the Cities, Destinations, Journeys, and The Matter of Wales.
Vermont - Justin Morgan and the enjoyment industry; Paris - within the peripherique; Oaxaca - an unquestionable place; Norfolk Island - an owl in paradise; London - land of lost content; Ottawa - city of the great hare; Trieste - loitering on the quay; Honolulu - the sea-city; Venice - into the bar; Texas - where the worlds meet; Nantucket - islands of islands; Glasgow - a reincarnation; Canberra - nothing if not Australian; Chicago - boss no more; St John's - thwack!; San Francisco - refresher course; Roussillon - an invented country?; Berlin - the worst over.
GOR007954278
9780192129963
0192129961
Locations by Jan Morris
Jan Morris
Used - Good
Hardback
Oxford University Press
1992-09-24
160
N/A
Book picture is for illustrative purposes only, actual binding, cover or edition may vary.
This is a used book - there is no escaping the fact it has been read by someone else and it will show signs of wear and previous use. Overall we expect it to be in good condition, but if you are not entirely satisfied please get in touch with us
Trustpilot