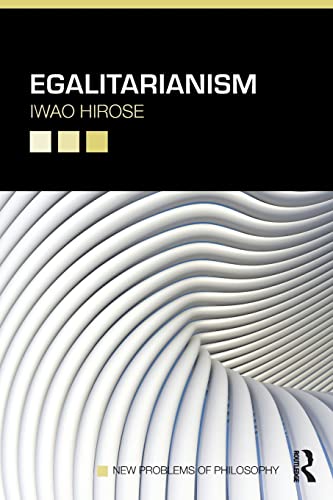 Some people are worse off than others. Does this fact give rise to moral concern? Egalitarianism claims that it does, for a wide array of reasons. It is one of the most important and hotly debated problems in moral and political philosophy, occupying a central place in the work of John Rawls, Thomas Nagel, G. A. Cohen and Derek Parfit. It also plays an important role in practical contexts such as the allocation of health care resources, the design of education and tax systems, and the pursuit of global justice.

Egalitarianism is a superb introduction to the problem of contemporary egalitarian theories. It explains how rival theories of egalitarianism evaluate distributions of people's well-being, and carefully assesses the theoretical structure of each theory. It also examines how egalitarian theories are applied to the distribution of health and health care, thus bringing a deceptively complex philosophical debate into clear focus. Beginning with a brief introduction to basic terminology, Iwao Hirose examines the following topics:

Including chapter summaries, annotated further reading and a glossary, this is an ideal starting point for anyone studying distributive justice for the first time, and will also be of interest to more advanced students and researchers in philosophy, economics, political theory, public policy, and public health.

"A superb introduction to egalitarianism as a theory of distributive justice. It is very clear, covers all the key issues, and manages to be rigorous without getting bogged down in detail. An ideal book for an upper level undergraduate course or a graduate course." - Peter Vallentyne, University of Missouri, USA

"This is a wonderful introduction to and insightful discussion of the core aspects of egalitarianism. With exemplary style, Hirose manages to bridge the gap between abstract philosophical analysis and concrete distributive judgments. It will be of great interest to philosophers, but also accessible to those working and studying in a wide range of disciplines." - Kasper Lippert-Rasmussen, Aarhus University, Denmark

Iwao Hirose is Associate Professor at the Philosophy Department and the School of Environment, McGill University, Canada. He is the author of The Ethics of Health Care Rationing (with Greg Bognar, Routledge, 2014) and Moral Aggregation (2014).

NLS9780415783194
9780415783194
0415783194
Egalitarianism by Iwao Hirose (McGill University, Canada)
Iwao Hirose (McGill University, Canada)
New Problems of Philosophy
New
Paperback
Taylor & Francis Ltd
2014-06-22
208
N/A
Book picture is for illustrative purposes only, actual binding, cover or edition may vary.
This is a new book - be the first to read this copy. With untouched pages and a perfect binding, your brand new copy is ready to be opened for the first time
Trustpilot