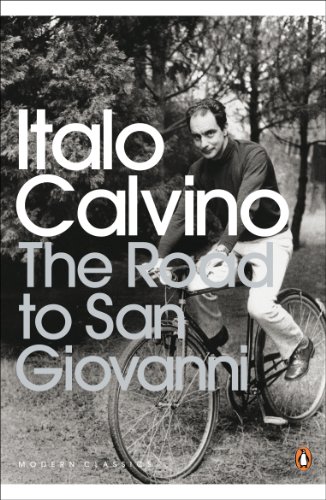 The Road to San Giovanni by Italo Calvino

Includes five autobiographical meditations that delves into the author's past, remembering awkward childhood walks with his father, a lifelong obsession with the cinema and fighting in the Italian Resistance against the Fascists.

The Road to San Giovanni by Italo Calvino

In five elegant autobiographical meditations Calvino delves into his past, remembering awkward childhood walks with his father, a lifelong obsession with the cinema and fighting in the Italian Resistance against the Fascists. He also muses on the social contracts, language and sensations associated with emptying the kitchen rubbish and the shape he would, if asked, consider the world. These reflections on the nature of memory itself are engaging, witty, and lit through with Calvino's alchemical brilliance.
'These autobiographical essays marvellously reconstitute different strata of his past in all the pristine, warm stir of immediacy' Sunday Times

Italo Calvino, one of Italy's finest postwar writers, has delighted readers around the world with his deceptively simple, fable-like stories. He was born in Cuba in 1923 and raised in San Remo, Italy; he fought for the Italian Resistance from 1943-45. His major works include Cosmicomics (1968), Invisible Cities (1972), and If on a winter's night a traveler (1979). He died in Siena in 1985.

Tim Parks was born in Manchester in 1954, studied at Cambridge and Harvard, and moved to Italy in 1980, where he lectures on literary translation in Milan. His translations from the Italian include works by Alberto Moravia, Italo Calvino, Roberto Calasso and Antonio Tabucchi. His most recent novels are Europa and Destiny, while his non-fiction encompasses a collection of essays, Adultery and Other Diversions, and an academic work, Translating Style. His account of provincial life in Italy, Italian Neighbours, was an international bestseller.

GOR006838398
9780141189710
0141189711
The Road to San Giovanni by Italo Calvino
Italo Calvino
Penguin Modern Classics
Used - Very Good
Paperback
Penguin Books Ltd
2009-05-28
112
N/A
Book picture is for illustrative purposes only, actual binding, cover or edition may vary.
This is a used book - there is no escaping the fact it has been read by someone else and it will show signs of wear and previous use. Overall we expect it to be in very good condition, but if you are not entirely satisfied please get in touch with us
Trustpilot