Alien Phenomenology, or What It's Like to Be a Thing Ian Bogost 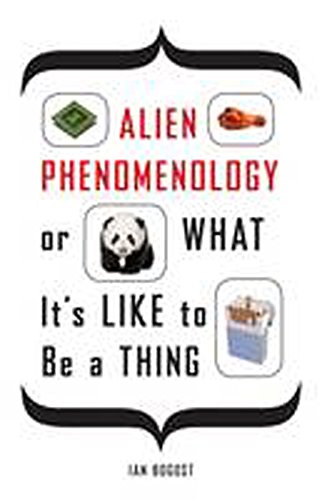 Alien Phenomenology, or What It's Like to Be a Thing by Ian Bogost

A bold new metaphysics that explores how all things-from atoms to green chiles, cotton to computers-interact with, perceive, and experience one another

Alien Phenomenology, or What It's Like to Be a Thing by Ian Bogost

Humanity has sat at the center of philosophical thinking for too long. The recent advent of environmental philosophy and posthuman studies has widened our scope of inquiry to include ecosystems, animals, and artificial intelligence. Yet the vast majority of the stuff in our universe, and even in our lives, remains beyond serious philosophical concern.

In Alien Phenomenology, or What It's Like to Be a Thing, Ian Bogost develops an object-oriented ontology that puts things at the center of being-a philosophy in which nothing exists any more or less than anything else, in which humans are elements but not the sole or even primary elements of philosophical interest. And unlike experimental phenomenology or the philosophy of technology, Bogost's alien phenomenology takes for granted that all beings interact with and perceive one another. This experience, however, withdraws from human comprehension and becomes accessible only through a speculative philosophy based on metaphor.

Providing a new approach for understanding the experience of things as things, Bogost also calls on philosophers to rethink their craft. Drawing on his own background as a videogame designer, Bogost encourages professional thinkers to become makers as well, engineers who construct things as much as they think and write about them.

"This book needs to be read by many different audiences since it is not only fascinating but also of considerable significance. As the task of thinking through things as actors in their own right according to Ian Bogost's maxim 'all things exist, yet they do not exist equally' becomes a real intellectual project so the implications of this stance start to multiply. In turn, they begin to produce the outlines of a landscape in which things aren't just are. Rather, they form an active cartography which is always and everywhere-an alien ontography." -Nigel Thrift, Vice Chancellor, University of Warwick

"Alien Phenomenology is worth a read simply because it is innovative, cleverly written, and bold."-Indie Street Radio

"Bogost goes a step further to describe not just what [object-oriented ontology] is, but how one would go about practicing it."-Experimental Progress, blog

"The possibilities of Bogost's theory applied to fine arts, theater, music, education, and even science are endless."-New Orleans Review

"Bogost's book effectively constitutes an exhortation to humans to 'stop and smell the aliens'-to allow the experience of attempting to think outside of a human conceptual framework to facilitate new ways of thinking that are based in speculation and analogy."-Invisible Culture

"The power of Alien Phenomenology, in my reading, is a recreation of a sense of wonder about everything we are in contact with, including the things we craft."-Itineration Journal

"The refreshing voice of Bogost's philosophy is well-suited to the brand of ontology he champions, and the strength of his prose is its capacity to communicate complex concepts in a straightforward fashion without oversimplifying or essentializing."-SubStance

"Alien Phenomenology, or What It's Like to Be a Thing, informed by years of video game design, encourages philosophers and theorists to reinvigorate their commitments to craft--as writers and makers."-Art Papers

Ian Bogost is professor of digital media at the Georgia Institute of Technology. His most recent book is How to Do Things with Videogames (Minnesota, 2011).

CIN000804648
9780816678983
0816678987
Alien Phenomenology, or What It's Like to Be a Thing by Ian Bogost
Ian Bogost
Posthumanities
Used - Very Good
Paperback
University of Minnesota Press
2012-03-19
168
N/A
Book picture is for illustrative purposes only, actual binding, cover or edition may vary.
This is a used book - there is no escaping the fact it has been read by someone else and it will show signs of wear and previous use. Overall we expect it to be in very good condition, but if you are not entirely satisfied please get in touch with us
Trustpilot