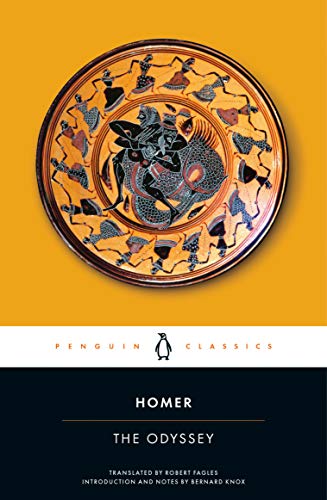 Deals with literature's grandest evocation of life's journey, at once an ageless human story and an individual test of moral endurance. This title presents you with the author's best-loved poem, recounting Odysseus' wanderings after the Trojan War.

Literature's grandest evocation of life's journey, at once an ageless human story and an individual test of moral endurance, Homer's ancient Greek epic The Odyssey is translated by Robert Fagles with an introduction and notes by Bernard Knox in Penguin Classics.

When Robert Fagles' translation of The Iliad was published in 1990, critics and scholars alike hailed it as a masterpiece. Here, one of the great modern translators presents us with The Odyssey, Homer's best-loved poem, recounting Odysseus' wanderings after the Trojan War. With wit and wile, the 'man of twists and turns' meets the challenges of the sea-god Poseidon, and monsters ranging from the many-headed Scylla to the cannibalistic Cyclops Polyphemus - only to return after twenty years to a home besieged by his wife Penelope's suitors. In the myths and legends retold in this immortal poem, Fagles has captured the energy of Homer's original in a bold, contemporary idiom.

Seven greek cities claim the honour of being the birthplace of Homer (c. 8th-7th century BC), the poet to whom the composition of the Iliad and Odyssey are attributed. The Iliad is the oldest surviving work of Western literature, but the identity - or even the existence - of Homer himself is a complete mystery, with no reliable biographical information having survived.

If you enjoyed The Odyssey, you might like Robert Fagles' translation of The Iliad, also available in Penguin Classics.

'A memorable achievement ... Mr Fagles has been remarkably successful in finding a style that is of our time and yet timeless'
Richard Jenkyns, The New York Times Book Review

'His translation of The Odyssey is his best work yet'
Garry Wills, New Yorker

Mr. Fagles has been remarkably successful in finding a style that is of our time and yet timeless. (Richard Jenkyns, The New York Times Book Review)

Homer was probably born around 725BC on the Coast of Asia Minor, now the coast of Turkey, but then really a part of Greece. Homer was the first Greek writer whose work survives. Both works attributed to Homer - The Iliad and The Odyssey - are over ten thousand lines long in the original.


Robert Fagles is Arthur W. Marks 1919 Professor of Comparative Literature at Princeton University and a member of the American Academy of Arts and Letters.

GOR001919646
9780143039952
0143039954
The Odyssey by Homer
Homer
Used - Very Good
Paperback
Penguin Books Ltd
2006-11-30
560
N/A
Book picture is for illustrative purposes only, actual binding, cover or edition may vary.
This is a used book - there is no escaping the fact it has been read by someone else and it will show signs of wear and previous use. Overall we expect it to be in very good condition, but if you are not entirely satisfied please get in touch with us
Trustpilot