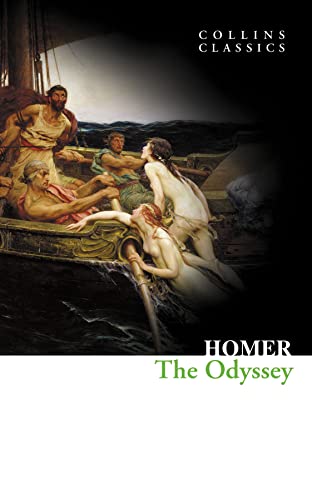 HarperCollins is proud to present its new range of best-loved, essential classics.

The Odyssey (Collins Classics) by Homer

HarperCollins is proud to present its new range of best-loved, essential classics.

'Alas that mortals
Should blame the gods! From us, they say,
All evils come. Yet they themselves
It is who through defiant deeds
Bring sorrow on them-far more sorrow
Than fate would have them bear.'

Attributed to the blind Greek poet, Homer, The Odyssey is an epic tale about cunning and strength of mind. It takes its starting point ten years after the fall of the city of Troy and follows its Greek warrior hero Odysseus as he tries to journey to his home of Ithaca in northwest Greece after the Greek victory over the Trojans.

On his travels, Odysseus comes across surreal islands and foreign lands where he is in turn challenged and supported by those that he meets on his travels as he attempts to find his way back home in order to vanquish those who threaten his estate. In turn, his son Telemachus has to grow up quickly as he attempts to find his father and protect his mother from her suitors.

Dealing with the universal themes of temptation and courage, the epic journey that Odysseus undertakes is as meaningful today as it was almost 3,000 years ago when the story was composed.

Homer's exact lifetime is unknown, but it is estimated as around 700-800 BC. Homer wrote the epic poems of 'The Iliad' and 'The Odyssey' and has had an enormous influence on the history of literature. He is considered the greatest of the ancient Greek poets.

GOR004372509
9780007420094
0007420099
The Odyssey (Collins Classics) by Homer
Homer
Collins Classics
Used - Very Good
Paperback
HarperCollins Publishers
2011-01-01
416
N/A
Book picture is for illustrative purposes only, actual binding, cover or edition may vary.
This is a used book - there is no escaping the fact it has been read by someone else and it will show signs of wear and previous use. Overall we expect it to be in very good condition, but if you are not entirely satisfied please get in touch with us
Trustpilot