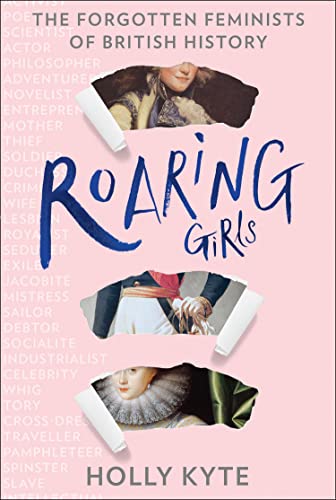 Meet the unsung heroines of British history who refused to play by the rules.

Roaring Girls tells the game-changing life stories of eight formidable women whose grit, determination and radical unconventionality saw them defy the odds to forge their own paths.

From the notorious cross-dressing thief Mary Frith in the seventeenth century to rebel slave Mary Prince and adventurer, industrialist and LGBT trailblazer Anne Lister in the nineteenth, these diverse characters redefined what a woman could be and what she could do in pre-twentieth-century Britain.

Bold, inspiring and powerfully written, Roaring Girls tells the electrifying histories of women who, despite every effort to suppress them, dared to be extraordinary.

'A really fascinating book that delves deep and proves that history is populated by unconventional women who's stories often go untold.' RED Online

Roaring Girls 'pulls back the curtain on women's history to tell eight extraordinary tales of courage and determination over 300 years'. S magazine

'A bold and thought-provoking read' CANDIS

Holly Kyte read Classics and English at Lady Margaret Hall, Oxford, and has since worked in publishing and journalism as an editor and literary critic. She has written for numerous newspapers, magazines and websites, including the Times Literary Supplement and the Sunday Telegraph, and after many years in London, now lives by the sea in Margate. Roaring Girls is her first book.

GOR010187458
9780008266080
0008266085
Roaring Girls: The forgotten feminists of British history by Holly Kyte
Holly Kyte
Used - Very Good
Hardback
HarperCollins Publishers
2019-11-28
464
N/A
Book picture is for illustrative purposes only, actual binding, cover or edition may vary.
This is a used book - there is no escaping the fact it has been read by someone else and it will show signs of wear and previous use. Overall we expect it to be in very good condition, but if you are not entirely satisfied please get in touch with us
Trustpilot