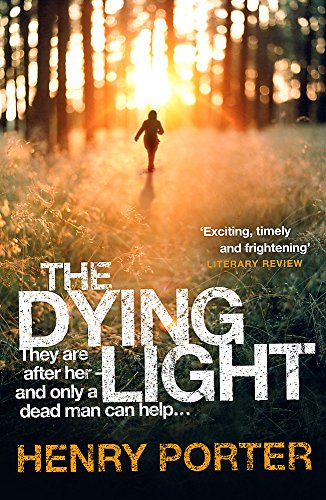 The Dying Light by Henry Porter

Foreseeing the Prism/GCHQ story, a chilling thriller of the police-state that the UK is about to become...from GUARDIAN journalist and novelist Henry Porter, 'one of the masters of the genre' [SUNDAY TELEGRAPH]

The Dying Light by Henry Porter

Foreseeing the Prism/GCHQ story, a chilling thriller of the police-state that the UK is about to become...from GUARDIAN journalist and novelist Henry Porter, 'one of the masters of the genre' [SUNDAY TELEGRAPH]

At his funeral the bells of the church were rung open rather than half-muffled, as is usual for the dead. Kate Lockhart has come along with corporate leaders, ministers and intelligence chiefs to a beautiful town in the Welsh Marches to mourn her soul mate, David Eyam, the brightest government servant of his generation. All that remains of Eyam are the burnt fragments of a man killed far from home in a horrific explosion.

Eyam has left a devastating legacy which certain people at the funeral are desperate to suppress - but Kate Lockhart is equal to Eyam's legacy. She becomes the focus of the state's paranoiac power and leads the local resistance to it, directed from beyond the grave by Eyam.

And the state is no match for the genius of the dead...

A chilling - and incredibly prescient, in the aftermath of the Snowden news story - thriller from the bestselling author of A SPY'S LIFE.

If the best thrillers should disrupt all sense of cosy complacency, Henry Porter's The Dying Light made just emerging from under the duvet seem a risky prospect. The author and Observer political commentator has woven an upsetting truth into his fiercely intelligent tale of a near-future, police-state Britain - all the legislation necessary to create the "technological totalitarianism" he depicts is already in place * METRO *
A vibrant thriller dealing with some of the great concerns of his [Porter's] journalistic career: the surveillance state and the erosion of individual liberty. Although set in the future, it feels as up-to-the-minute as tomorrow's headlines * NEW STATESMAN *
A tense, intelligent conspiracy thriller set in a horribly plausible future-present Britain where surveillance is so pervasive that it's impossible to do anything unobserved * THE GUARDIAN *
Porter rails against that very British apathy which has already allowed the state to pass all the legislation necessary to turn his dystopian nightmare into reality - the same apathy, ironically, which makes such nakedly polemical British novels so rare, and welcome * DAILY TELEGRAPH *
For those who like political thrillers, this is one of the season's best: scary, informative and, alas, eminently believable * ECONOMIST *
A compelling thriller which at the same time is a persuasive polemic about the threat to civil liberties in the United Kingdom * LITERARY REVIEW *
The book is a salutary warning of what happens when big business and politics end up in bed together. I'm sure some with think Porter to be paranoid. The rest of us will feel it's terrifyingly plausible * REVIEWING THE EVIDENCE.COM *
Porter has all the talents of a good thriller writer, particularly strong, crisp characterisation and the ability seamlessly to blend action and expertise. What really stands out in this novel, though, is the grimly plausible glimpse he gives us of a future that is already creeping up on us: a United Kingdom where elements of government and corporate interests are combining to monitor and ultimately control the lives of the country's citizens * SPECTATOR *
Beautifully written, sophisticated thriller * BIG ISSUE IN THE NORTH *
Set in a mdoern Britain where surveillance reigns like the one remaining eye of God, this is a tense and claustrophobic conspiracy thriller. * CATHOLIC HERALD *
A wonderful novel. I read it addictively and was sorry the minute it was over. It's way too good to be called a thriller -- Richard Ford
A gripping and thought provoking thriller * CHOICE *
Henry Porter has written five novels for Orion and one children's novel. In 2005, his novel Brandenburg, which is set in East Germany at the time of the Fall of the Berlin Wall, won the Ian Fleming Steel Dagger. His thriller Empire State, the first about extraordinary rendition, was also nominated for the award. His books have been widely acclaimed and translated into over a dozen languages. For five years he campaigned against the attack on civil liberties by the government in the Observer newspaper where he writes a column. During that time he debated with Tony Blair in a public exchange of emails about his government's record on surveillance, databases and the rights of the individual. He has been the London editor of Vanity Fair since 1993.
GOR010583342
9780753827970
0753827972
The Dying Light by Henry Porter
Henry Porter
S.F. Masterworks
Used - Like New
Paperback
Orion Publishing Co
2010-09-16
544
Short-listed for CWA Ian Fleming Steel Dagger 2010
Book picture is for illustrative purposes only, actual binding, cover or edition may vary.
The book has been read, but looks new. The book cover has no visible wear, and the dust jacket is included if applicable. No missing or damaged pages, no tears, possible very minimal creasing, no underlining or highlighting of text, and no writing in the margins
Trustpilot