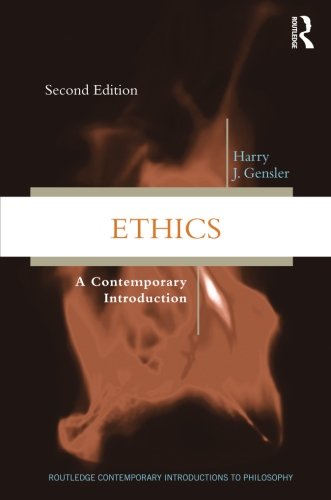 Harry Gensler's Ethics introduces undergraduates to the main issues in contemporary moral philosophy. It also relates these issues to practical controversies, with special attention paid to racism, moral education, and abortion. It gives a practical method for thinking about moral issues, a method based largely on the golden rule.

Key Features:
* Serves as either the sole textbook for a lower-level introduction to ethics/moral philosophy course or a supplementary text for a more advanced undergraduate ethics course
* Provides clear, direct writing throughout, making each chapter easily accessible for an engaged undergraduate
* Offers a philosophically rigorous presentation of the golden rule
* Includes helpful study aids, including: bolded technical terms, boxes for key ideas, chapter summaries, suggested readings, and a glossary/index

Key additions to the Second Edition:
* A new chapter on virtue ethics, which deals with Aristotle, Plato, and related controversies
* A new chapter on natural law theory, which deals with Aquinas, double effect, sexual morality, and related controversies
* A significantly revised chapter on the golden rule, which is now much clearer on certain key points
* A significantly revised chapter on nonconsequentialism, which now has expanded coverage of human rights, libertarianism, and socialism, and uses the right to health care as a case example
* An expanded bibliography
* A new appendix that overviews key books students will want to pursue upon completing Ethics: A Contemporary Introduction, Second Edition
* A rewritten instructional program, EthiCola, which is now much easier to download and use and has (for students) revised exercises for each chapter and (for instructors) a score-processing program, class slides, and instructor's manual. This can be found on the book's companion website: http://www.routledge.com/textbooks/gensler.

"There have been many introductions to ethics but none comes close to the clarity and student-friendliness that characterize Gensler's Ethics: A Contemporary Introduction. The content is not only informative but also a pleasure to read. Gensler's resourcefulness keeps producing engaging questions that hold the reader's attention from cover to cover. Thoroughly researched and rigorously argued, this revised and amplified second edition will prove very valuable to lecturers of ethics and students for many years to come."-Louis Caruana, S.J., Reader in Philosophy, Heythrop College, University of London

"Gensler's Ethics affords a concise and coherent account of the most significant frameworks of ethical thinking in contemporary ethics. It also offers readers a consistent and rigorous mode of analysis of each position. The text is replete with study questions and bibliographical resources. This second edition also adds a helpful new section on virtue ethics."-James Swindal, Associate Professor and Chair of Philosophy, Duquesne University

Harry J. Gensler, S.J., is Professor of Philosophy at John Carroll University in Cleveland. Some of his other books include Formal Ethics (1996), Ethics: Contemporary Readings (2004), Anthology of Catholic Philosophy (2005), Historical Dictionary of Logic (2006), Historical Dictionary of Ethics (2008), and Introduction to Logic, Second Edition (2010).
Introduction 1. Cultural Relativism 2. Subjectivism 3. Supernaturalism 4. Intuitionism 5. Emotivism 6. Prescriptivism 7. Consistency 8. The Golden Rule 9. Moral Rationality 10. Consequentialism 11. Nonconsequentialism 12. Virtue Chapter 13. Natural Law 14. Synthesis Chapter Suggested Works Bibliography Glossary/Index
GOR009030990
9780415803885
0415803888
Ethics: A Contemporary Introduction by Harry J Gensler (John Carroll University, USA)
Harry J Gensler (John Carroll University, USA)
Routledge Contemporary Introductions to Philosophy
Used - Very Good
Paperback
Taylor & Francis Ltd
2011-02-14
200
N/A
Book picture is for illustrative purposes only, actual binding, cover or edition may vary.
This is a used book - there is no escaping the fact it has been read by someone else and it will show signs of wear and previous use. Overall we expect it to be in very good condition, but if you are not entirely satisfied please get in touch with us
Trustpilot