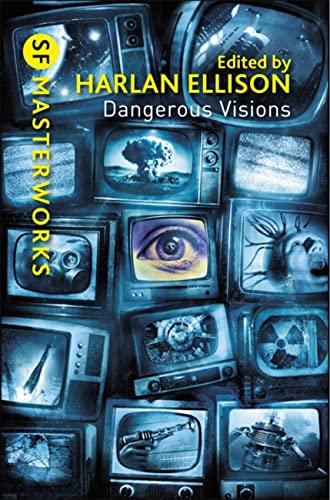 One of the most influential anthologies of all time returns to print, as relevant now as when it was first published.

Anthologies seldom make history, but Dangerous Visions is a grand exception. Harlan Ellison's 1967 collection of science fiction stories set an almost impossibly high standard, as more than a half dozen of its stories won major awards - not surprising with a contributors list that reads like a who's who of 20th-century SF:

Evensong by Lester del Rey | Flies by Robert Silverberg | The Day After the Day the Martians Came by Frederik Pohl | Riders of the Purple Wage by Philip Jose Farmer | The Malley System by Miriam Allen deFord | A Toy for Juliette by Robert Bloch | The Prowler in the City at the Edge of the World by Harlan Ellison | The Night That All Time Broke Out by Brian W. Aldiss | The Man Who Went to the Moon - Twice by Howard Rodman | Faith of Our Fathers by Philip K. Dick | The Jigsaw Man by Larry Niven | Gonna Roll the Bones by Fritz Leiber | Lord Randy, My Son by Joe L. Hensley | Eutopia by Poul Anderson | Incident in Moderan and The Escaping by David R. Bunch | The Doll-House by James Cross | Sex and/or Mr. Morrison by Carol Emshwiller | Shall the Dust Praise Thee? by Damon Knight | If All Men Were Brothers, Would You Let One Marry Your Sister? by Theodore Sturgeon | What Happened to Auguste Clarot? by Larry Eisenberg | Ersatz by Henry Slesar | Go, Go, Go, Said the Bird by Sonya Dorman | The Happy Breed by John Sladek | Encounter with a Hick by Jonathan Brand | From the Government Printing Office by Kris Neville | Land of the Great Horses by R. A. Lafferty | The Recognition by J. G. Ballard | Judas by John Brunner | Test to Destruction by Keith Laumer | Carcinoma Angels by Norman Spinrad | Auto-da-Fe by Roger Zelazny | Aye, and Gomorrah by Samuel R. Delany

Unavailable for 15 years, this huge anthology now returns to print, as relevant now as when it was first published.

Dangerous Visions is a landmark in science fiction, one that can proudly stand against those literary snobs who look down their nose at the genre -- Antony Jones * SFBOOKREVIEWS blog *
Harlan Ellison is a multiple HUGO and NEBULA AWARD winning writer and editor. He wrote the script for the hugely popular STAR TREK episode, The City on the Edge of Forever, the NEBULA AWARD-winning novella, A BOY AND HIS DOG, and many acclaimed stories including 'Shatterday' and 'I Have No Mouth and I Must Scream'. His groundbreaking anthology DANGEROUS VISIONS was instrumental in defining the New Wave movement. Harlan Ellison lives in Los Angeles.
GOR004894522
9780575108028
0575108029
Dangerous Visions by Harlan Ellison
Harlan Ellison
S.F. Masterworks
Used - Very Good
Paperback
Orion Publishing Co
2012-02-09
656
N/A
Book picture is for illustrative purposes only, actual binding, cover or edition may vary.
This is a used book - there is no escaping the fact it has been read by someone else and it will show signs of wear and previous use. Overall we expect it to be in very good condition, but if you are not entirely satisfied please get in touch with us
Trustpilot