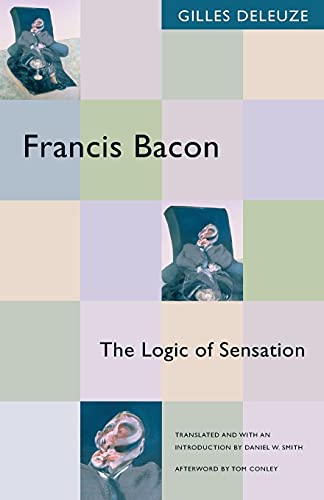 Francis Bacon: The Logic of Sensation by Gilles Deleuze

Translated and with an Introduction by Daniel W. Smith
Afterword by Tom Conley

Gilles Deleuze had several paintings by Francis Bacon hanging in his Paris apartment, and the painter's method and style as well as his motifs of seriality, difference, and repetition influenced Deleuze's work. This first English translation shows us one of the most original and important French philosophers of the twentieth century in intimate confrontation with one of that century's most original and important painters.

In considering Bacon, Deleuze offers implicit and explicit insights into the origins and development of his own philosophical and aesthetic ideas, ideas that represent a turning point in his intellectual trajectory. First published in French in 1981, Francis Bacon has come to be recognized as one of Deleuze's most significant texts in aesthetics. Anticipating his work on cinema, the baroque, and literary criticism, the book can be read not only as a study of Bacon's paintings but also as a crucial text within Deleuze's broader philosophy of art.

In it, Deleuze creates a series of philosophical concepts, each of which relates to a particular aspect of Bacon's paintings but at the same time finds a place in the general logic of sensation. Illuminating Bacon's paintings, the nonrational logic of sensation, and the act of painting itself, this work-presented in lucid and nuanced translation-also points beyond painting toward connections with other arts such as music, cinema, and literature. Francis Bacon is an indispensable entry point into the conceptual proliferation of Deleuze's philosophy as a whole.

Gilles Deleuze (1925-1995) was professor of philosophy at the University of Paris, Vincennes-St. Denis. He coauthored Anti-Oedipus and A Thousand Plateaus with Felix Guattari. These works, as well as Cinema 1, Cinema 2, The Fold, Proust and Signs, and others, are published in English by Minnesota.

Daniel W. Smith teaches in the Department of Philosophy at Purdue University.
CIN000777786
9780816643424
0816643423
Francis Bacon: The Logic of Sensation by Gilles Deleuze
Gilles Deleuze
Used - Very Good
Paperback
University of Minnesota Press
20050525
224
null null null null null null null null null null
Book picture is for illustrative purposes only, actual binding, cover or edition may vary.
This is a used book - there is no escaping the fact it has been read by someone else and it will show signs of wear and previous use. Overall we expect it to be in very good condition, but if you are not entirely satisfied please get in touch with us
Trustpilot