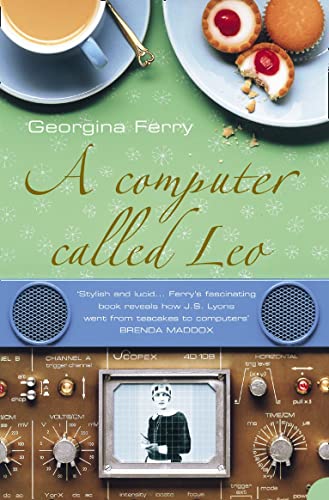 The eccentric story of one of the most bizarre marriages in the history of British business: the invention of the world's first office computer and the Lyons Teashop.

The eccentric story of one of the most bizarre marriages in the history of British business: the invention of the world's first office computer and the Lyons Teashop.

The Lyons teashops were one of the great British institutions, providing a cup of tea and a penny bun through the depression and the war, though to the 1970s. Yet Lyons also has a more surprising claim to history.

In the 1930s John Simmons, a young maths graduate in charge of the clerks' offices, had a dream: to build a machine that would automate the millions of tedious transactions and process them in as little time as possible. Simmons' quest for the first office computer - the Lyons Electronic Office - would take 20 years and involve some of the most brilliant young minds in Britain.

Interwoven with the story of creating LEO is the story of early computing, from the Difference Engine of Charles Babbage to the codecracking computers at Bletchley Park and the instantly obsolescent ENIAC in the US. It is also the story of post war British computer business: why did it lose the initiative? Why did the US succeed while British design was often superior?

'A COMPUTER CALLED LEO is as captivating a book as you could hope for, whether it's industrial history you're after, or a commentary on the development of computing, or social documentary, or an elegant tragedy. One reads it with a growing sense of gloomy fatalism and even gloomier recognition. But one also reads it with admiration and fascination, not just for Georgina Ferry's poised, cool and elegant storytelling but for the people involved in the making of LEO, who, before they were let down by the suits, did something extraordinary because nobody had told them it couldn't be done.' Michael Bywater, Daily Telegraph

'Meticulously researched and cogently written, it sets the story in the wider context of early computer development both in America and the UK.' Fanny Blake, The Times

'This is not a book for computer nerds, but one for anyone curious about mid-20th-century Britain's unique combination of engineering genius and economic frailty.' Sunday Telegraph

Georgina is the author of Dorothy Hodgkin: A Life, a biography of the only British woman scientist to win a Nobel Prize and THE COMMON THREAD (with John Sulston) which is short listed for the 2002 Samuel Johnson Prize. Born in Hong Kong, Georgina has lived in Oxford for the past 19 years. She has worked as a science writer and broadcaster.

GOR002813010
9781841151861
1841151866
A Computer Called LEO: Lyons Tea Shops and the world's first office computer by Georgina Ferry
Georgina Ferry
Used - Very Good
Paperback
HarperCollins Publishers
2004-08-16
256
N/A
Book picture is for illustrative purposes only, actual binding, cover or edition may vary.
This is a used book - there is no escaping the fact it has been read by someone else and it will show signs of wear and previous use. Overall we expect it to be in very good condition, but if you are not entirely satisfied please get in touch with us
Trustpilot