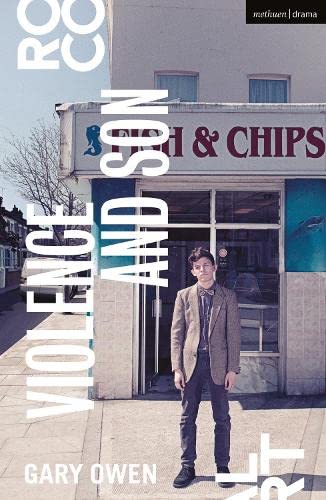 Violence and Son by Gary Owen

Violence and Son by Gary Owen

'People know, you're my boy. And they know better than to lay a fucking finger on you. See? You are safer here with me, than you have ever been.' Liam's 17 years old, loves Dr Who and has lost his mum. He has had to move from London to Wales, to the valleys, to the middle of nowhere, to live with a dad he doesn't know. Whose nickname isn't Violence for nothing.
'Resurgent Welsh playwright Gary Owen has a knack for getting inside the heads of troubled teens...Now he excels himself...the finesse of Owen's writing ably ranges from the local to the universal...Every teenager - and every recovering ex-teenager - should see this.' * Telegraph ???? *
'Gary Owen has written a seriously good play, set in small-town south Wales, about violence, love and loss... What is especially good about the play is its downright condemnation of a bullying male ethos and its acknowledgment that domestic violence has its own complexities... a fine play.' * The Guardian *
Welsh playwright Gary Owen makes his Royal Court debut with Violence and Son. He is the winner of the Meyer Whitworth, George Devine and Pearson best play awards. His other plays include Iphigenia in Splott, Love Steals Us from Loneliness, Crazy Gary's Mobile Disco, The Shadow of a Boy, The Drowned World (winner Fringe first), Ghost City, Cancer Time, SK8, Big Hopes, In the Pipeline, Blackthorn, Mary Twice, Amgen, Broken, Bulletproof, The Ugly Truth and Free Folk. His adaptations include Spring Awakening and Ring, Ring, a new version of La Ronde for the Royal Welsh College of Music and Drama and Dicken's A Christmas Carol for Sherman Cymru. He is a Creative Associate at Watford Palace Theatre, where his plays We that Are Left, Mrs Reynolds and the Ruffian, and Perfect Match have been produced.
NPB9781350351615
9781350351615
135035161X
Violence and Son by Gary Owen
Gary Owen
Oberon Modern Plays
New
Paperback
Bloomsbury Publishing PLC
2022-07-28
128
N/A
Book picture is for illustrative purposes only, actual binding, cover or edition may vary.
This is a new book - be the first to read this copy. With untouched pages and a perfect binding, your brand new copy is ready to be opened for the first time
Trustpilot