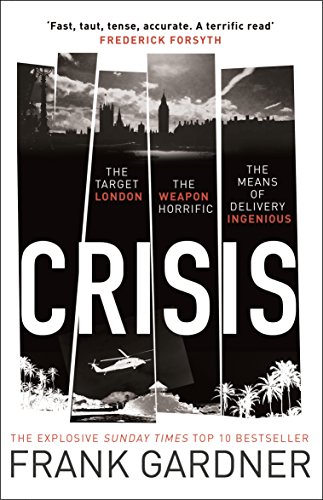 Hunted down, captured, tortured and on the run from one of South America's most powerful and ruthless drugs cartels and its psychotic leader thirsting for revenge, Luke is in a life-or-death race against time to prevent a disaster on a truly terrifying scale: London is the target, the weapon is diabolical and the means of delivery is ingenious.

Introducing Luke Carlton - ex-Special Boat Service commando, and now under contract to MI6 for some of its most dangerous missions. Sent into the steaming Colombian jungle to investigate the murder of a British intelligence officer, Luke finds himself caught up in the coils of a plot that has terrifying international dimensions. Hunted down, captured, tortured and on the run from one of South America's most powerful and ruthless drugs cartels and its psychotic leader thirsting for revenge, Luke is in a life-or-death race against time to prevent a disaster on a truly terrifying scale: London is the target, the weapon is diabolical and the means of delivery is ingenious. Drawing on his years of experience reporting on security matters, CRISIS is Frank Gardner's debut novel. Combining insider knowledge, up-to-the-minute hardware, fly on the wall insights with heart-in-mouth excitement, CRISIS boasts an irresistible, visceral frisson of authenticity: smart, fast-paced and furiously entertaining, here is a thriller for the 21st century.
"Full of tomorrow's headlines, Crisis is a nerve-shredding thriller with an intimate knowledge of the world it portrays. This is intelligent, high-voltage story-telling of the very highest order." -- TONY PARSONS
"Written by someone who has been there, done that and knows what it's about, Crisis is a thriller you just can't put down." -- Sir ROGER MOORE
"Gardner knows his subject - and it shows. A rattling good read." -- JOHN HUMPHRYS, BBC Broadcaster
"Fast, taut, tense, accurate. A terrific read." -- FREDERICK FORSYTH
"A terrific page-turner." * SUNDAY TIMES *
"Frank Gardner has written a fast and exciting story rooted in the present horrifying dangers that surrounds us. Crisis is brimful of an insider's insights and reeks of authority." -- GERALD SEYMOUR
"Follows the path pioneered by Frederick Forsyth . . . authenticity seeps from every page . . . this is a promising start." * DAILY MAIL *
"Impressive . . .Gardner's debut begins at speed and scarcely draws breath thereafter." * The Times *
"Few thriller debuts possess the confidence and verve of Frank Gardner's CRISIS . . . a book of exhilarating panache." * SUNDAY TIMES *
"A seriously compulsive page turner." -- PETER SNOW
"Combines insider knowledge with heart-in-mouth excitement." * i-NEWSPAPER *
"Action-packed . . . the book's title scarcely does justice to such a thrilling read." * HUFFINGTON POST *
"Fast moving." * THE SUN *
"Irresistible . . . smart, authentic and always entertaining . . . high-voltage storytelling at its best and worthy of Frederick Forsyth or John le Carre." * CRIME REVIEW *
"Gardner obviously has an up-to-the-minute understanding of contemporary warfare and he is also a very good writer. This is a thrilling adventure." * LITERARY REVIEW *
"Gardner is a dab hand at ratcheting up the tension . . . a must read." * BUSINESS STANDARD *
"A compelling read." -- SIR JOHN SAWYERS, Former Chief of MI6
Born in 1961, Frank Gardner is the BBC's Security Correspondent, reporting for television and radio on issues of domestic and international security, notably on Islamist extremist related terrorism. A fluent Arabist, with a degree in Arabic and Islamic Studies, he was previously the BBC's Middle East Correspondent based in Cairo, and before that in Dubai. In June 2004, while reporting in Riyadh, Frank and his cameraman, Simon Cumbers, were ambushed by Islamist gunmen. Simon was killed outright, Frank was shot multiple times and left for dead. Against all expectations, he survived and, in 2006, published his acclaimed and bestselling memoir, Blood and Sand. In 2009 he published Far Horizons, a much praised account of his life as an inveterate traveller and explorer. His first novel, the thriller Crisis, was a No.1 bestseller. Awarded an OBE for services to journalism, Frank has also written for the Economist, Sunday Times, Daily Telegraph and Time Out and has been published in The Best of Sunday Times Travel Writing. He lives in London with his family.
GOR008008408
9780857503169
0857503162
Crisis by Frank Gardner
Frank Gardner
Used - Very Good
Paperback
Transworld Publishers Ltd
2017-01-12
576
N/A
Book picture is for illustrative purposes only, actual binding, cover or edition may vary.
This is a used book - there is no escaping the fact it has been read by someone else and it will show signs of wear and previous use. Overall we expect it to be in very good condition, but if you are not entirely satisfied please get in touch with us
Trustpilot