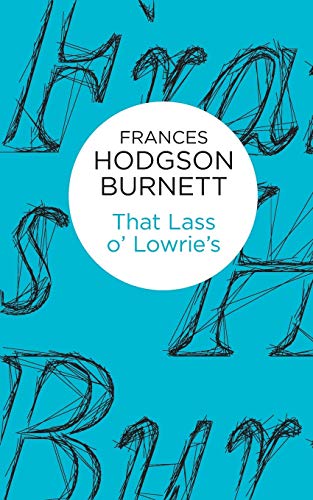 Although best known for Little Lord Fauntleroy and The Secret Garden, Frances Hodgson Burnett was considered one of the leading writers in America on the strength of her adult novels, which made her name in the 1870s and 1880s. Ripe for rediscovery, Bello is proud to bring a select group of these classic novels back into print.

That Lass O' Lowrie's was Frances Hodgson Burnett's first novel. A tale of Lancashire, her chosen heroine is pit-girl. Burnett uses the novel to explore questions of social inequality and injustice, with much of the material drawn from real life. Serialised in Scribner's Monthly before publication as a book, and first published in April 1877, That Lass O' Lowrie's won unanimous praise from the critics.

Frances Hodgson Burnett (1849-1924) was born in Manchester and spent her early years there with her family. Her father died in 1852, and eventually, in 1865, Frances emigrated to the United States with her mother and siblings, settling with family in Knoxville, Tennessee. Frances began to be published at the age of nineteen, submitting short stories to magazines and using the proceeds to help support the family. In 1872, she married Swan Burnett, a doctor, with whom she had two sons while living in Paris. Her first novel, That Lass o'Lowrie's, was published in 1877, while the Burnetts were living in Washington D. C. Following a separation from her husband, Burnett lived on both sides of the Atlantic, eventually marrying for a second time, however she never truly recovered from the death of her first son, Lionel. Best known during her lifetime for Little Lord Fauntleroy (1886), her books for children, including The Secret Garden and The Little Princess, have endured as classics, but Burnett also wrote many other novels for adults, which were hugely popular and favourably compared to authors such as George Eliot.
NLS9781447268437
9781447268437
1447268431
That Lass o' Lowrie's by Frances Hodgson Burnett
Frances Hodgson Burnett
New
Paperback
Pan Macmillan
2014-04-10
220
N/A
Book picture is for illustrative purposes only, actual binding, cover or edition may vary.
This is a new book - be the first to read this copy. With untouched pages and a perfect binding, your brand new copy is ready to be opened for the first time
Trustpilot