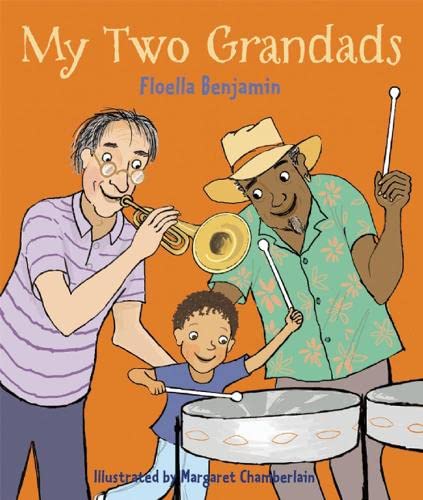 My Two Grandads by Floella Benjamin

My Two Grandads by Floella Benjamin

Aston's Grandad Roy played in a steel band and Grandad Harry played the trumpet in a brass band. Aston always enjoyed going to visit them and listen to them practise. But soon he wanted to join in. So he asked Grandad Roy to teach him to play the steel drums and then he asked Grandad Harry to teach him to play the trumpet. He loved practising both instruments. Then the school needs a band to play at the school fair, and both grandads want their own band to play. Finaly Aston had an idea - both bands join together to make one big band, and Aston joins in first on steel drums and then on trumpet. This delightful story of a mixed-race family reconciling their very different cultures is a wonderful celebration of diverse cultures. Written by one of Britain's foremost campaigners and media personalities and illustrated by a highly regarded illustrator, this book is sure to build on the success of My Two Grannies.
If anyone is qualified to depict the multi-cultural experience, our Baroness Benjamin of Beckenham is and here we get the tale of two grandads and all the trumpet-blowing and drum-banging, not to mention embarrassing dad dancing, that entails. Families South East A cheering tale about what can happen when we co-operate despite our differences. Juno My Two Grandad's' is such a happy book, it's a pleasure to read, especially with Margaret Chamberlain's bright and lively illustrations emphasising its joyous nature... The story is told in a direct and easy manner which children will love either reading or hearing... Lovely! Armadillo Magazine A great read for a confident reader although ideal for adults to read aloud and discuss or sing along with the children! Early Years Educator How refreshing to find books that avoid the 'token black' syndrome and feature a genuine culturally diverse family. And celebrate an often marginalised subject like music into the bargain. Bravo! School Librarian

One of six children, Floella Benjamin was born in Trinidad but was brought up in England. After leaving school she spent a short time in the world of banking and accountancy, but the staid Chief Accountants Office of Barclay's Bank just didn't suit her effervescent personality and she soon found her way into the theatre.

She appeared in several successful West End shows including 'Jesus Christ Superstar', 'The Black Mikado' with Michael Denison and 'The Husband in Law' with Kenneth Williams. She then progressed to television drama, her first appearance was in 'Within These Walls' with Googie Withers. Numerous drama roles followed and she worked with some of Britain's top directors including Richard Eyre, Martyn Friend and Jim O'Brien. Then fate took a hand and she found her place as a presenter of the BBC's legendary children's programmes, 'Playschool' and 'Playaway', through which she became a household name. Many drama, comedy, current affairs and magazine programmes followed, including 'The Gentle Touch', 'Angels', 'Bergerac', 'A Houseful of Plants' and 'Daytime Live'

In 1977 she appeared in her first feature film, 'Black Joy'. She was critically acclaimed at the Cannes film festival for her portrayal of 'Miriam' in the film which was the British entry that year.

She has appeared in many pantomimes and Christmas shows including 'Puss in Boots', 'Aladdin', 'Peter Pan' and 'Babes in the Wood'.

Floella has also worked on numerous radio programmes, from children's education and entertainment shows to adult drama. She hosted her own current affairs programme on Radio London's 'Black Londoners'.

She has also narrated many commercial audio books and story tapes. She has done many voice overs for television and radio commercials including, Haze air freshener, Aero chocolate, Farley's baby food, Kitkat, Anchor Butter, Bird's Eye Fish Fingers and an audio tour of the Tate Modern.

Floella has written and appeared in several educational, religious and entertainment videos. She has appeared as narrator with a number orchestras, including, The Northern Symphony Orchestra, The East of England Orchestra and The Welsh Chamber Orchestra in performances of well loved, classical and contemporary pieces including, 'Carnival of the Animals', 'Peter and the Wolf', 'Barbar the Elephant', 'The Snowman', 'Paddington Bear' and 'Superted'. She appeared recently with The Ulster Orchestra in a series of six concerts in Northern Ireland. She narrated 'Tubby the Tuba' and performed one of Aaron Copland's 'Old American Songs' as well as introducing several well known classical pieces. The concerts were televised by BBC Ulster. Since 1983 Floella has written over 20 children's books including 'For Goodness Sake' a guide to choosing right from wrong for children and young people, plus a definitive guide to Caribbean Cookery. She has also written many articles for magazines and in- house journals and has had regular columns in 'Parents', 'TV Times' and 'Good Idea'.

Her book 'Coming to England' published in hardback in October 1995 by Pavilion and in paperback by Puffin in 1997, recounts how she and her family moved to England from their home in Trinidad. The book has now been published as an educational edition and is on the National Reading List in schools and universities. The BBC Education commissioned her to make it into a television drama in 2002 which won an Royal Television Society (RTS) Award in 2003 and nominated for a RIMA Award in 2005.

In 1987 Floella turned some of her boundless energy to setting up her own television production company with her husband Keith Taylor. Since then she has produced hundreds of programmes, primarily for the audience she loves best........children. 'Treehouse', her first production was a thirteen part series for Channel 4. She was then commissioned to produce a series of 131 pre-school programmes for BSB entitled 'Playabout'. The series has sold in Asia and the Middle East. Her Channel 4 production 'Hullaballoo'( 26 part series) has sold worldwide and won a major award in the USA - 'Parents Choice, Best Children's Video'. Her cookery programmes 'Caribbean Light' with Anton Edelman and 'Caribbean Kitchen' have been a great success both at home and abroad. 'Jamboree' her pre-school CITV programme has consistently claimed over 50% of the viewers.

She has also produced 'A Taste of Barbados' a for Carlton Food Network which highlights the food and cultural diversity of the island.

Her company produced two other cookery series - 'Great British Picnics' and 'Africa on a Plate' . She also produced and presented an eight part series called 'A Taste of Cuba' about the people, history, architecture, culture and food. She produced a four part series for Carlton entitled 'Statues & Monuments' screened in October 2002 and 'Coming to England' a children's drama for BBC Education based on her book about her childhood shown in 2003.

As well as broadcaster and producer over the years she has sat on several boards and committees including, Ofcom Content Board, the Millennium Commission, the National Film & Television School and BAFTA.

She celebrates 36 years in media and 30 years in Children's Television both as a presenter and Independent Producer.

In 2004 she was awarded the BAFTA Special Lifetime Award for her services to children's television.

She was awarded the OBE by her Majesty the Queen in the 2001 New Year's Honours List 'For Services to Broadcasting'. She is also an icon amongst both the young and the old.

In 2005 she received the IVCA Clarion Champion Corporate Social Responsibility (CSR) Award for her work right across the media. Also the GG2 Lifetime Leadership & Diversity Award.

In 2006 she received a Trinidad and Tobago Lifetime Award and the British Association of Steelbands Award for her contribution to Art and Culture in the UK.

She was conferred with the Honorary Degree of Doctor of Letters (DLitt) by Exeter University in 2005. The Council and Senate of the University felt that Floella should receive this honour because of the influence she has had on British society through her work. In 2006, the University of Exeter appointed her as Chancellor, replacing Lord Alexander of Weedon who died in 2005.

She has completed the London Marathon nine times raising money for Barnardos and Sickle Cell Society.

She ran with the Olympic Flame on 26th June 2004. Carrying it through Peckham on its way through the streets of London. She is a Cultural Ambassodor for the 2012 London Olympics

Floella is particularly concerned with the plight of children and their human rights throughout the world and dedicates a great deal of time to supporting pressure groups and charitable organisations. She campaigned tirelessly for a Minister for Children to oversee joined up Government policy a position which is now successfully in place. Much of her time is spent touring the country, visiting children's hospitals, schools and children's homes in an effort to help advance the idea that the welfare, care and education of our children is of vital importance to our future.

She is a Vice President of NCH Action for Children and Barnardos as well as patron of a number of other charities including, 'The Home Farm Trust', 'The Sickle Cell Society' 'SPARKS' and The Independent Adoption Service.

In the past she has been an advisor and supporter of many other organisations including: Pre-schools Playgroups Association, Oxfam, Save the Children, Friends of the Young Deaf, Cancer Relief Macmillan Fund, Parent Network, WATCH ( What About the Children), Turning Point and Brixton Prison Education Department.

Despite her hectic schedule she always puts her family first and organises her life around them. She neither smokes or drinks alcohol and believes in a healthy lifestyle.

The other Frances Lincoln book she has contributed to is Skip Across the Ocean.

Margaret Chamberlain is a well-respected illustrator of children's books. Her books for Frances Lincoln include Has Anyone Seen Jack?, Look Out He's Behind You, Tales from Grimm, My Two Grannies and My Two Grandads.

GOR004201850
9781847800602
1847800602
My Two Grandads by Floella Benjamin
Floella Benjamin
Used - Very Good
Hardback
Frances Lincoln Publishers Ltd
2011-03-03
32
N/A
Book picture is for illustrative purposes only, actual binding, cover or edition may vary.
This is a used book - there is no escaping the fact it has been read by someone else and it will show signs of wear and previous use. Overall we expect it to be in very good condition, but if you are not entirely satisfied please get in touch with us
Trustpilot