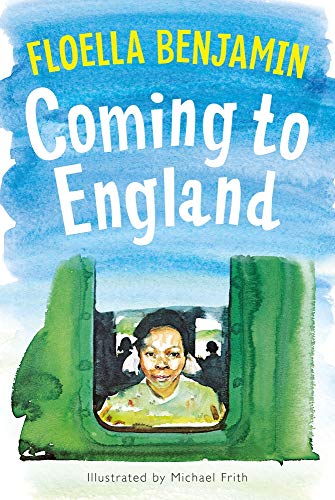 Coming to England by Floella Benjamin

A twentieth-anniversary edition of Floella Benjamin's important childhood memoir as part of the Windrush generation.

Coming to England by Floella Benjamin

A twentieth-anniversary edition of Floella Benjamin's classic memoir. Includes a new foreword by the author and some additional historical information. Beautifully illustrated by Michael Frith.

Floella Benjamin was just a young girl when she, her sister and two brothers arrived in England in 1960 to join their parents, whom they had not seen for fifteen months. They had left the island paradise of Trinidad to make a new home in London - part of a whole generation of West Indians, known as the Windrush generation, who were encouraged to move to Britain and help rebuild the country after the Second World War.

Reunited with their mother, Floella was too overwhelmed at first to care about the cold weather and the noise and dirt from the traffic. But, as her new life began, she was shocked and distressed by the rejection she experienced. She soon realized that the only way to survive was to work twice as hard and be twice as good as anyone else.

This inspirational story is a powerful reminder that courage and determination can overcome adversity.

Children's Book of the Week: There aren't many successful memoirs pitched to his age group, but Floella Benjamin's story, is gripping, with a narrative simple enough to engage the very young. Her story is honest, true and particularly relevant today. -- Alex O'Connell * The Times *

Floella Benjamin was born in Trinidad in 1949 and came to England in 1960. She is an actress, presenter, writer, producer, working peer and an active advocate for the welfare and education of children. She is best known as a presenter of the iconic BBC children's television programmes Play School and Play Away, and she continues to make children's programmes. Her broadcasting work has been recognized with a Special Lifetime Achievement BAFTA and OBE. She was appointed a Baroness in the House of Lords in 2010. In 2012 she was presented with the prestigious J. M. Barrie Award by Action for Children's Arts, for her lasting contribution to children's lives through her art. Floella has written thirty books, including Coming to England, which is used as a resource in schools in social and cross-curricular areas. The book was adapted into an award-winning film for BBC Education.

Michael Frith is an artist and illustrator whose work has appeared in many national newspapers worldwide, including Newsweek, Time magazine, The Times and the Sunday Times. He has held twenty-five solo exhibitions, including fourteen in London, the most notable at Smith's Gallery.

GOR007740331
9781509835485
1509835482
Coming to England by Floella Benjamin
Floella Benjamin
Used - Very Good
Hardback
Pan Macmillan
2016-10-06
144
N/A
Book picture is for illustrative purposes only, actual binding, cover or edition may vary.
This is a used book - there is no escaping the fact it has been read by someone else and it will show signs of wear and previous use. Overall we expect it to be in very good condition, but if you are not entirely satisfied please get in touch with us
Trustpilot