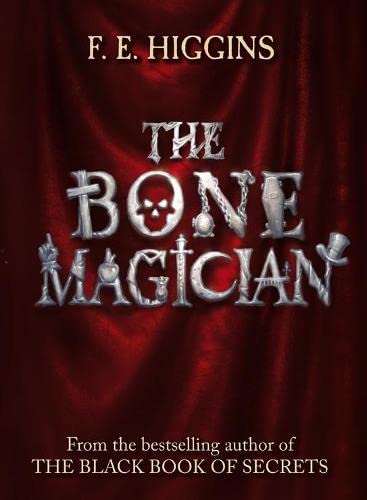 From the devilishly talented author of the THE BLACK BOOK OF SECRETS comes another dark and thrilling tale that has enough twists, turns and scares to satisfy any reader.

The Silver Apple Killer preys on the people of Urbs Umida, a rotten and wretched city. Two things connect the victims - they all had a small silver apple in their pocket, and they had all recently visited a notorious inn to see one of two acts: the hideous Gluttonous Beast and the astonishing Bone Magician . . .

Since his father disappeared under a dark cloud of scandal, Pin Carpue has been alone in the world. His work for the local undertaker keeps him busy, but his life is bleak. Then Pin encounters the Bone Magician, a man who can raise corpses and make the dead speak.

As Pin is drawn into an intoxicating world of mystery and intrigue, he becomes suspicious of Juno, the Bone Magician's young assistant. A strange darkness haunts her just as the Silver Apple Killer stalks the streets at night - and as Pin pieces together the secrets of Bone Magic, his own life becomes fraught with grave danger . . .

F. E. Higgins was born in England but raised in Ireland. She lives and writes in a house that dates back to the fifteenth century, in a small village in rural Kent. THE BLACK BOOK OF SECRETS was her debut novel.
GOR001278011
9781405090407
1405090405
The Bone Magician by F. E. Higgins
F. E. Higgins
Used - Very Good
Hardback
Pan Macmillan
2008-03-07
336
N/A
Book picture is for illustrative purposes only, actual binding, cover or edition may vary.
This is a used book - there is no escaping the fact it has been read by someone else and it will show signs of wear and previous use. Overall we expect it to be in very good condition, but if you are not entirely satisfied please get in touch with us
Trustpilot