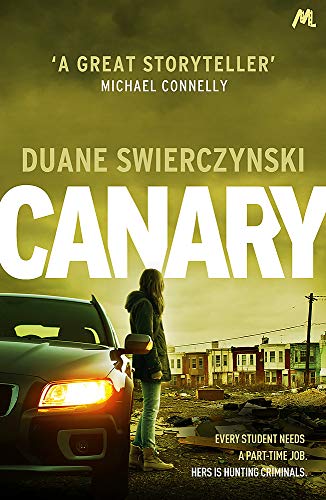 Every student needs a part-time job.
Hers is hunting criminals.

Sarie Holland is a good kid. An Honors student. She doesn't even drink.

So when a narcotics cop busts her while she's doing a favour for a friend, she has a lot to lose.

Desperate to avoid destroying her future, Sarie agrees to become a CI - a confidential informant. Armed only with a notebook, she turns out to be as good at catching criminals as she is at passing tests.

But it's going to take more than one nineteen-year-old to clean up Philadelphia. Soon Sarie is caught in the middle of a power struggle between corrupt cops and warring gangs, with nothing on her side but stubbornness and smarts.

Which is bad news for both the police and the underworld. Because when it comes to payback, CI #137 turns out to be a very fast learner...

Compulsive, written with wry humanity and a deft and thrilling touch for the unexpected * Daily Mail *
Duane Swierczynski writes the 'new noir,' full of bad choices, courage, and sudden disaster, all delivered at a break-neck pace -- Charlaine Harris, author of the bestselling True Blood series
Inventive...breathes fresh life into a familiar plot with shifting perspectives, sly humor, puckish chapter titles and a crackerjack pace * Kirkus Reviews *
Duane Swierczynski is a much-needed breath of fresh air in the book world...This guy is a great storyteller. I never know what he is going to come up with or where he is going to take me. I just know I won't be complaining about a thing once I get there. -- Michael Connelly
The premise may be absurd, but it's good enough to propel the breathless action scenes that make Swierczynski's cinematic novels so much fun to read - on the couch or on the run. * New York Times *
If non-stop, cool action sequences with fun characters are your thing, you need to read some Swierczynski stories * Wired *
Duane Swierczynski is the author of thrillers Expiration Date and Severance Package, and the three novels in the Charlie Hardie trilogy, FUN & GAMES, HELL & GONE and POINT & SHOOT. He also writes for Marvel Comics and co-authored Level 26 with CSI creator Anthony Zuiker.
GOR009224274
9781444754179
1444754173
Canary by Duane Swierczynski
Duane Swierczynski
Used - Very Good
Paperback
Hodder & Stoughton
2016-01-28
400
N/A
Book picture is for illustrative purposes only, actual binding, cover or edition may vary.
This is a used book - there is no escaping the fact it has been read by someone else and it will show signs of wear and previous use. Overall we expect it to be in very good condition, but if you are not entirely satisfied please get in touch with us
Trustpilot