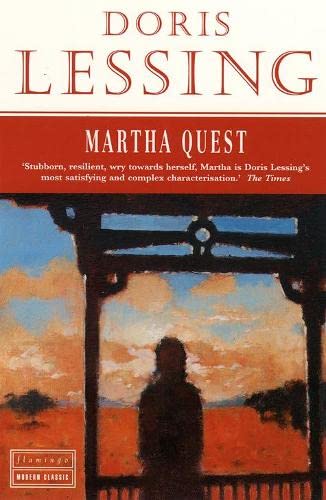 The opening book in the Nobel Prize for Literature winner's `Children of Violence' series tracing the life of Martha Quest from her childhood in colonial Africa to old age in post-nuclear Britain.

The opening book in the Nobel Prize for Literature winner's `Children of Violence' series tracing the life of Martha Quest from her childhood in colonial Africa to old age in post-nuclear Britain.

When we first meet Martha Quest, she is a girl of fifteen living with her parents on a poor African farm. She is eager for life and resentful of the deadening narrowness of home, and escapes to take a job as a typist in the local capital. Here, in the `big city', she encounters the real life she was so eager to know and understand. As a picture of colonial life, `Martha Quest' succeeds by the depth of its realism alone; but always at its centre is Martha, a sympathetic figure drawn with unrelenting objectivity.

Martha's Africa is Doris Lessing's Africa: the restrictive life of the farm; the atmosphere of racial fear and antagonism; the superficial sophistication of the city. And both Martha and Lessing are Children of Violence: the generation that was born of one world war and came of age in another, whose abrasive relationships with their parents, with one another, and with society are laid bare brilliantly by a writer who understands them better than any other.

`I read the "Children of Violence" novels and began to understand how a person could write about the problems of the world in a compelling and beautiful way. And it seemed to me that was the most important thing I could ever do.' Barbara Kingsolver

`The "Children of Violence" series gives an astounding compression of a total, coherent vision, as if Doris Lessing knew all along where it would end.' The Times

Doris Lessing was one of the most important writers of the second half of the 20th-century and was awarded the Nobel Prize for Literature 2007. Her novels include The Grass is Singing, The Golden Notebook and The Good Terrorist. In 2001, Lessing was awarded the David Cohen Prize for a lifetime's achievement in British literature. In 2008, The Times ranked her fifth on a list of "The 50 greatest British writers since 1945". She died in 2013.
GOR001297003
9780586089989
0586089985
Martha Quest by Doris Lessing
Doris Lessing
Used - Very Good
Paperback
HarperCollins Publishers
1990-04-06
352
N/A
Book picture is for illustrative purposes only, actual binding, cover or edition may vary.
This is a used book - there is no escaping the fact it has been read by someone else and it will show signs of wear and previous use. Overall we expect it to be in very good condition, but if you are not entirely satisfied please get in touch with us
Trustpilot