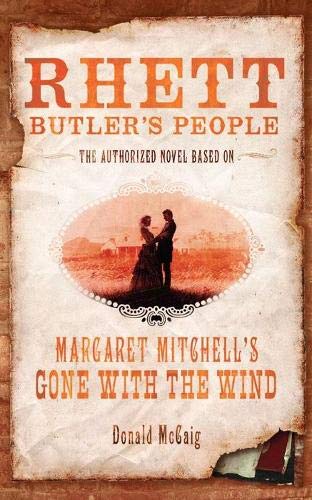 Did he give a damn? Rhett's story, the magnificent parallel to one of the greatest love stories of all time

This astonishing novel that parallels the great American classic novel, Gone With the Wind by Margaret Mitchell, has been twelve years in the making. Now, the most beloved and most widely-read saga of the American Civil War is retold from the point of view of its unrivalled hero, the dashing and enigmatic scion of the South, Rhett Butler. See what Rhett is really thinking as he sits in the armchair listening to Scarlett declare her love for Ashley. Find out what happened on the other side of the cupboard, where Melanie was hiding. Discover the truth of Rhett's relationship with Belle Watling . . .

Brought to vivid and authentic life by the hand of a master, Rhett Butler's People fulfills the dreams of countless millions whose imaginations have been indelibly marked by Gone With the Wind.

'Rhett Butler's People covers the period from 1843 to 1874, nearly two decades more than are chronicled in Gone with the Wind . Readers will get inside Rhett's head as he meets and courts Scarlett O'Hara in one of the most famous love affairs of all time.' The New York Times

"Get inside Rhett's head as he meets and courts Scarlett in one of the most famous love affairs of all time..."--"The New York Times"

"McCaig creates a convincing back story and has a real feel for men and the tensions between fathers, sons, friends and soldiers, as well as the nuances of Southern honor...The novel focuses on Rhett's point of view and explains exactly where he got his dash."--"USA"" Today"

"In McCaig's capable hands, Margaret Mitchell's mystery man is still handsome and daring but fitted with a plausible backstory and human frailties...--"Roanoke"" Times "

""Rhett Butler's People "broadens the canvas, giving Rhett new dueling and blockade-running adventures, and adding intriguing characters like Confederate cavalier-turned-Klansman Andrew Ravanel, a rancid version of Ashley Wilkes who romances Rhett's sister, Rosemary. McCaig paints a richer, darker panorama of a Civil War-era South, where poor whites seethe with resentment, and slavery and racism are brutal facts of life that an instinctive gentleman like Rhett can work around but not openly challenge. McCaig thus imparts a Faulknerian tone to the saga that sharpens Mitchell's critique of Southern nostalgia without losing the epic sweep and romantic pathos. The result is an engrossing update of "Gone With the Wind" that fans of the original will definitely give a damn about.""--Publishers Weekly"

"McCaig has taken on a monumental task in attempting to augment the mythology of such a well-loved story...While remaining largely faithful to Mitchell's framework, he has made the story of Butler his own." --"The Post and Courier" (Charleston, SC)

"In "Gone With the Wind," Butler was mysterious, and that added to his allure. Here, we learn more about his background: about his harsh, unforgiving father; his long-suffering mother; his own wild ways.In some ways, this Rhett is a kinder, gentler sort than the one readers loved..."
--"Tampa Tribune"

Donald McCaig is the author of several well-reviewed novels of the American Civil War, including Jacob's Ladder, which was hailed as 'the best civil war novel ever written' by the Virginia Quarterly. He has spent the last six years researching and writing Rhett Butler's People.
GOR000951407
9780330455824
0330455826
Rhett Butler's People by Donald McCaig
Donald McCaig
Used - Very Good
Paperback
Pan Macmillan
2008-07-04
528
N/A
Book picture is for illustrative purposes only, actual binding, cover or edition may vary.
This is a used book - there is no escaping the fact it has been read by someone else and it will show signs of wear and previous use. Overall we expect it to be in very good condition, but if you are not entirely satisfied please get in touch with us
Trustpilot