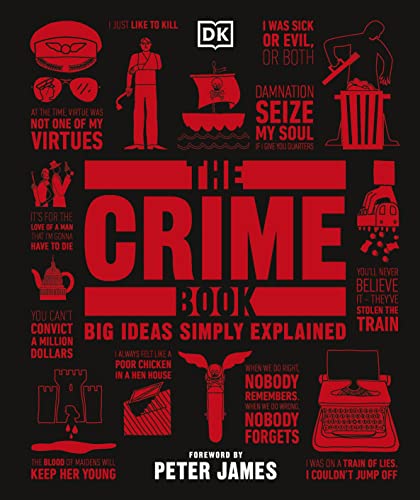 The Crime Book by DK

Investigate 100 of the world's most notorious crimes, including the Great Train Robbery, the Lindbergh kidnapping, and the murders of serial killer Jeffrey Dahmer.

Were the perpetrators delusional, opportunist, or truly evil? Find out what really happened and how cases were solved.

Discover conmen with sheer verve, such as Victor Lustig who "sold" the Eiffel Tower to scrap dealers in 1925, adrenaline-fuelled escapes, and mind-bending exploits of pirates, kidnappers, and drug cartels. The Crime Book demystifies malware, cybercrimes, and Ponzi schemes and sets out the terrifying ploys of mass murderers from 16th-century Elizabeth Bathory who drained young girls' blood to the more recent exploits of Rosemary and Fred West.

Like a virus, crime mutates and adapts. The Crime Book explains how pivotal moments in history opened up new opportunities for criminals, such as the smuggling of alcohol during the American Prohibition era. It also charts developments in justice and forensics including the Innocence Project, which used DNA testing to exonerate wrongly convicted convicts. It examines how the forces of law and order have fought back against crime, explaining ingenious sting operations such as tracking down the jewel thief Bill Mason and the final capture of murderer Ted Bundy.

With a foreword from bestselling crime author Peter James, The Crime Book is an enthralling introduction to humanity's darker side.

For a wide-ranging take on true crime illustrated with infographics, The Crime Book is a bloody, engrossing history of criminology, from bandits and serial killers to 21st century cyber predators. Famous cases include Jack The Ripper, the Black Dahlia murder and Bonnie and Clyde. * Crime Scene *
Like other Dorling Kindersley books, the layout is what jumps out at you ... we think it will make a great gift for anyone who loves crime fiction. It seems a perfect reference tool for authors who need a little inspiration or who want to ground their work with a few facts from the world of true crime ... Crime fiction author Peter James adds the cherry on top with his foreword. * Crime Fiction Lover *
From the 1671 attempt to steal the Crown Jewels to the 2015 Hatton Garden heist, and taking in Burke and Hare, Bonnie and Clyde and the Bandit Queen of Uttar Pradesh, The Crime Book by Dorling Kindersley is an exhaustively researched and lavishly illustrated treasure-trove of malfeasance through the ages and around the world. * The Sunday Times and The Times Crime Club *
GOR009414141
9780241298961
0241298962
The Crime Book: Big Ideas Simply Explained by DK
DK
Big Ideas
Used - Like New
Hardback
Dorling Kindersley Ltd
2017-04-03
352
N/A
Book picture is for illustrative purposes only, actual binding, cover or edition may vary.
The book has been read, but looks new. The book cover has no visible wear, and the dust jacket is included if applicable. No missing or damaged pages, no tears, possible very minimal creasing, no underlining or highlighting of text, and no writing in the margins
Trustpilot