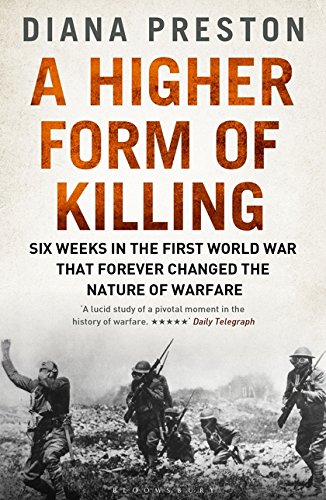 A Higher Form of Killing by Diana Preston

A Higher Form of Killing: Six Weeks in the First World War That Forever Changed the Nature of Warfare by Diana Preston

Between April 22 and May 31, 1915, Western civilization was shocked. World War I was already appalling in its brutality, but until then it had been fought on the battlefield and by rules long agreed by international convention. Suddenly those rules were abandoned. On April 22, at Ypres, German canisters spewed poison gas over French and Canadian soldiers in their trenches; on May 7, the German submarine U-20, without warning, torpedoed the passenger liner Lusitania; and on May 31, a German zeppelin began the first aerial bombardment of London. Each of these actions violated rules of war carefully agreed to at the Hague Conventions of 1898 and 1907 which were deliberately breached by the German authorities in an attempt to spread terror and force the Allies to surrender. While that failed, the psychological damage these attacks caused far outweighed the physical casualties. Celebrated historian Diana Preston links these events for the first time, revealing the dramatic stories behind them through the eyes of those who were there. Placing the attacks in the context of the centuries-old debate over what constitutes "just war" and "civilized warfare," Preston shows how subsequently the other combatants felt the necessity to develop and use similar weapons. Now, when such weapons of mass destruction are once again deployed and threatened, and terrorist atrocities abound in very different kinds of conflicts, the vivid story of their birth is of great relevance.
A British historian of considerable breadth and accomplishment, Preston (The Dark Defile: Britain's Catastrophic Invasion of Afghanistan, 1838-1842, 2012, etc.) focuses on three wartime innovations that elevated to new heights mankind's ability to slaughter itself: submarines, zeppelins and poison gas . . . In what is often difficult but necessary reading, Preston provides haunting descriptions of the effects of poison gas. A harrowing--and, in this era of drones, absolutely pertinent--look at the rapacious reaches of man's murderous imagination. -- starred review * Kirkus *
Preston deftly and graphically weaves the complex stories--hitherto kept distinct--of these land, sea and air innovations into a connected narrative. For the first time, readers can grasp the mounting cognitive assault on civilians, soldiers and politicians of the curious clustering of events that spring. * New York Times Book Review *
A fascinating and chilling chronicle of weapons of mass destruction . . . Preston's eloquent and objective history of war is immensely exciting. * Library Journal *
Vividly narrating the deployment of each of these new technologies, Preston emphasizes the horrors they delivered and the ethical deliberations (or absence thereof) of key decision makers. Viewed together, Preston suggests, these three new ways of killing demonstrated the shortcomings of the laws of war and set the trajectory for even more powerful weapons of mass destruction. * Booklist *
Well-detailed, shattering . . . This is Preston at the top of her analytical form, offering fascinating modern parables on war, mortality and civilization. -- starred review * Publishers Weekly *
In her fine new book, A Higher Form of Killing, British author Diana Preston looks at six weeks from late April to June 1915, which, as her subtitle contends, 'forever changed the nature of warfare.' Over this period, Germans deployed chlorine gas at Ypres on April 22 in an attempt to break through the Allied lines; the German submarine U-20 sank the British passenger ship Lusitania, killing 1,189 civilians on May 7; and a German zeppelin airship bombed London on May 31. * The Washington Post *
The author's excellent use of war diaries and newspapers in the sections on Zeppelin warfare are particularly gripping, juxtaposing the terror and awe felt by Londoners and the heroism required of Zeppelin crews . . . A well-documented and argued analysis of the emergence of modern warfare. -- starred review * Shelf Awareness *
For an illuminating look at the Lusitania in the context of Germany's pioneering use of weapons of mass destruction, see Diana Preston's A Higher Form of Killing. -- Lev Grossman * TIME Magazine *
Diana Preston captures beautifully this brief period * Evening Standard *
A wonderful reflection on the excesses of the first world war -- Rana Dasgupta * Observer *
Diana Preston is an acclaimed historian and author of the definitive Lusitania: An Epic Tragedy, Before the Fallout: From Marie Curie to Hiroshima (winner of the Los Angeles Times Book Prize for Science and Technology), The Boxer Rebellion, and The Dark Defile: Britain's Catastrophic Invasion of Afghanistan, 1838-1842, among other works of narrative history. She and her husband, Michael, live in London.
GOR008459466
9781408878224
1408878224
A Higher Form of Killing: Six Weeks in the First World War That Forever Changed the Nature of Warfare by Diana Preston
Diana Preston
Used - Like New
Paperback
Bloomsbury Publishing PLC
2016-05-19
352
N/A
Book picture is for illustrative purposes only, actual binding, cover or edition may vary.
The book has been read, but looks new. The book cover has no visible wear, and the dust jacket is included if applicable. No missing or damaged pages, no tears, possible very minimal creasing, no underlining or highlighting of text, and no writing in the margins
Trustpilot