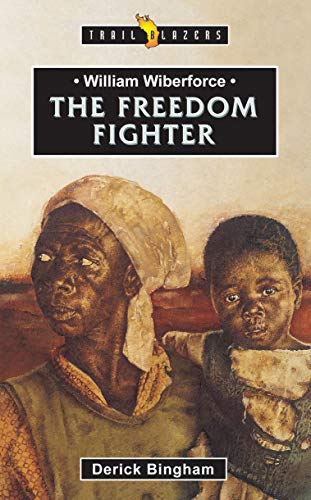 One man fought to bring freedom and relief from the terrors of the slave trade; it took him forty-five years. His name was William Wilberforce.

From the book:
'No! No! cried the little boy, 'Please no! I want to stay with my Mother!' 'Be quiet!' shouted the man who roughly pulled his mother from him. She was taken to a raised platform and offered for sale, immediately. The heart-broken mother was to be separated from her little boy for the rest of her life.

This was the fate of thousands of women and children in the days before slavery was abolished. One man fought to bring freedom and relief from the terrors of the slave trade; it took him forty-five years. His name was William Wilberforce.

This is his exciting story that shows the amazing effect his faith in Christ and his love for people had on transforming a nation.

"A story deserving to be told to a new generation."

"This week I was invited to speak at the Scottish Story telling Centre on the royal mile in Edinburgh. Through its partnership with the Scottish Storytelling Forum, the centre supports a national network of storytellers. It is involved in outreach projects with local authorities, environmental agencies, community centres and libaries, engaging with all age groups and diverse cultures of modern Scotland and providing opportunities for the socially and educationally excluded to take part in community-based inclusive cultural experiences.
As the flagship of the network, the centre strives to reinforce Scotland's vigorous contribution to a world-wide revival of interest in storytelling and story-telling traditions.
The centre highlights the fact that 'Storytelling happens when the story is told live without print or technology'. I had none and found myself facing an overflowing crowd from four Edinburgh schools with many of them sitting around my feet on the stage. There is no audience in the world that let's you know how you are doing like an audience of Children. My story was about the freedom fighter himself, William Wilberforce.
I traced Wilberforces life through his childhood to University where he wasted a lot of precious time. I spoke of the influence of the Rev. John Newton upon Wilberforce's life where he approached him for advice as an young MP. I spoke of his desire to trust and follow Jesus Christ and how he became the conscience of the the nation in his formidable and horrendously despised campaign to abolish slavery. The Children listened closely as I told them that the United Nations now tells that there is more slavery in our world than in Wilberforces day. I encouraged them with the fact that maybe one of them could get involved in helping to rid the world of slavery.
The story ended and I went upstairs to engage with the children. They crowded me and one girl stuck her head through the crowd. 'I have two questions' she said 'one: could Wilberforce be a woman? Two: Could one person change the world?'
My, the things children ask! Could Wilberforce be a woman? certainly. Can one person change the world? I would say 'One person cannot change the world but you can change the world for one person.'
The World can then be changed one person at a time!"

"The abolition of slavery in the U.K. has an anniversary in the year 2007. This is why teachers, sunday school teachers and children's workers should make sure they stock up on Wilberforce material in the run up to this. A film on Wilberforce's life is also being launched in 2006. Make the most of these events and get Christian books into children's homes on the back of them!"

... It is great to see the stories of these Christian heroes made available to older children and teenagers.

-- Liz Baines- Together with Children

"If ever I relived a life in my imagination it was while writing this life of the greatest Christian politician of all time. I travelled with him in my mind to his life as a boy in Hull and on to Cambridge University. I marvelled at the way the Lord reached him and saved his soul. I held my breath as he took on the horrendous slave trade in a three-hour speech before the House of Commons that became one of the greatest speeches in the history of mankind. His eventual triumph over slavery, three days before he died was astounding! The greatest joy I have experienced following the writing of this book has been to see it published in Arabic"

-- Derick Bingham, Author
Derick Bingham was the teaching pastor at Christchurch, Belfast. He was also an Adjunct Professor of English Literature at the John Brown University and a Fellow of the Royal Society for Arts. A popular author and well known public speaker Derick passed away on the 6th of March 2010 following a long battle with Leukemia.
GOR002742028
9781857923711
1857923715
William Wilberforce: The Freedom Fighter by Derick Bingham
Derick Bingham
Trail Blazers
Used - Very Good
Paperback
Christian Focus Publications Ltd
2005-09-10
144
N/A
Book picture is for illustrative purposes only, actual binding, cover or edition may vary.
This is a used book - there is no escaping the fact it has been read by someone else and it will show signs of wear and previous use. Overall we expect it to be in very good condition, but if you are not entirely satisfied please get in touch with us
Trustpilot