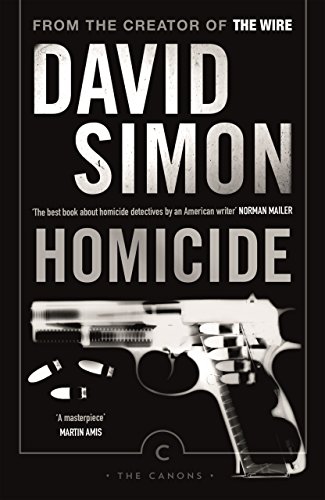 The bestselling true crime classic from the creator of The Wire

Homicide: A Year On The Killing Streets by David Simon

Based on a year on the killing streets of Baltimore, David Simon's true crime masterpiece reveals a city few will ever experience. Day in day out citizens are shot, stabbed, or bludgeoned to death. At the centre of this hurricane of crime is the city's homicide unit, a small brotherhood of men who fight for whatever justice is possible in a deadly world.

A masterpiece . . . Simon has exceptional literary gifts of eye and ear. Few novelists have written so well about the corrosiveness of the modern American city -- MARTIN AMIS
David Simon has single-handedly raised the bar for writing about crime, crime-fighting and the messy and imprecise business of justice to new and nearly unreachable levels . . . a work of tremendous ambition which made everything in the genre to follow irrelevant -- ANTHONY BOURDAIN
True genius * * Sunday Times * *
A hard-nosed classic * * GQ * *
An extraordinary book * * Guardian * *
Brilliant . . . desolate, sharp, poetic and passionate * * Financial Times * *
The best book about homicide detectives by an American writer -- NORMAN MAILER
A staggering work that is almost impossible to put down . . . a gripping depiction of America's culture of violence . . . Simon conjures up his subjects' individual personalities in three-dimensional detail. The detectives leap off these pages . . . A raw, revelatory and utterly real account of life and death in Baltimore * * Metro * *
The real delight is the discovery of Simon's perfect ear for dialogue; his masterful construction and pacing; and his empathy for his occasionally brutal but nevertheless inspirational subjects * * Observer * *
Simon does an extraordinary job of getting under the skin and into the minds of the police officers * * New York Times Book Review * *
A remarkable psychological and personal picture of 18 men labouring under immense pressure in traumatic circumstances . . . it is not just a majestic piece of reporting, it demonstrates Simon's instinctive ability to identify how the political and psychological interact . . . It reads like a thriller as he takes you through the desperate world of inner city West and East Baltimore, slaying by slaying * * Daily Telegraph * *
A reporter who keeps his wits about him . . . A very good book * * The New Yorker * *
Homicide is as intense a work of observation as you're likely ever to find, studded with Simon's caustic, wry and suspicious personality, as well as the ability to portray people as they truly are, usually a complicated shade of grey * * Herald * *
Simon has captured the poetry of the meanest streets * * Los Angeles Times * *
Homicide is a beautifully-written, almost poetic observation of a desperately harrowing subject and Simon deserves the highest praise for going to the darkest places of the underbelly of the American dream and coming out with a gripping account of what it is like to live and work there * * Tribune * *
Brushes away the accretions of myth to reveal the banality of crime . . . it's a sober, unsurprised account of the desperately sad lives of people who commit most crimes and a quiet testimonial to the people who clear up the mess * * Word Magazine * *
Remarkable . . . A True Crime Classic . . . a journalistic masterpiece of a brutal, bloody, bewildering year in the Baltimore Police Department's homicide unit * * Associated Press * *
Certainly one of the most engrossing police procedural mystery books ever written, not only because the crimes and plots and personalities are real, but because Simon is a terrific writer who has mastered the necessities and nuances of his material * * Newsday * *
The world of urban violence has never been so well portrayed, nor has the day-to-day craft of the detective * * Chicago Tribune * *
Simon followed a group of Baltimore detectives through a year on the mean streets. The resulting book is a hefty volume, giving Simon cope for a huge amount of detail and it's this, I think, that makes it such compulsive reading. How the detectives work - the crime they dace, the casual murders, the hopeless lives - all seen through Simon's eyes and those of the detectives he follows so closely * * Publishing News * *
A frank, insightful, and meticulously detailed look at detectives and their work * * San Francisco Chronicle * *
An amazingly frank and often hilarious tribute to homicide detectives everywhere . . . Simon has taken the art of covering cops to a new high * * Washington Times * *
David Simon is an author, journalist, producer and script writer and is best known as the creator of HBO's Peabody Award-winning series The Wire. His first book, the international bestseller Homicide, won the Edgar Award and the Anthony Award and became the basis for the NBC award-winning drama. His second book, The Corner: A Year in the Life of An Inner-City Neighbourhood, co-authored with Edward Burns, was made into an Emmy-winning HBO miniseries. Simon also co-created the HBO series Generation Kill with Ed Burns, and Treme with Eric Overmyer. He lives in Baltimore.
GOR006997688
9781782116301
1782116303
Homicide: A Year On The Killing Streets by David Simon
David Simon
Canons
Used - Very Good
Paperback
Canongate Books Ltd
2015-07-16
672
N/A
Book picture is for illustrative purposes only, actual binding, cover or edition may vary.
This is a used book - there is no escaping the fact it has been read by someone else and it will show signs of wear and previous use. Overall we expect it to be in very good condition, but if you are not entirely satisfied please get in touch with us
Trustpilot