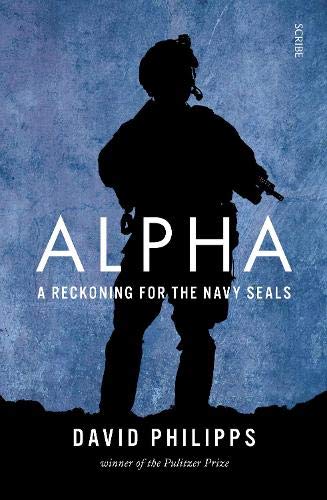 Alpha: a reckoning for the Navy SEALs by David Philipps

The shocking, true story of a soldier gone rogue, and the court martial case that divided America.

This is the full story of Eddie Gallagher, a US recruit who was inspired to serve his nation, who became addicted to combat, and whose need to prove himself among his fellow soldiers pushed him to extremes. His actions during a combat deployment to Mosul would divide his platoon, then the SEALs, the Navy, the armed forces, the government, and even the American public, when the President intervened in his trial.

Alpha is an examination of how culture within the military has evolved since 9/11. In an endless war without major victories, the media has instead celebrated achievements of SEAL missions - such as the killing of Osama Bin Laden, the rescuing of Captain Phillips, and the survival of Marcus Luttrell. But the SEALs' popularity blinded the public to what was also happening within the armed forces. When Gallagher was accused of killing an unarmed enemy combatant, it created a scandal that reached the White House and millions around the world.

'This is a book to make your blood boil. Expertly reported and written, Alpha details a truly shameful national episode, and stands as a powerful corrective for those who mistake cruelty for toughness and equate war with murder.'

'This is one of the best books to come out of the Iraq war. It is also one of the saddest. There have been many books about Navy SEALs and snipers, but Alpha is by far the most important. I think it will be required reading for the Navy, as Black Hearts has become for the Army. Anyone who cares about the American military needs to read this.'

'Alpha is a phenomenally reported, deeply compelling portrait of moral courage and moral cowardice in the SEAL teams. Philipps details not simply the many failures of leadership within SEAL ranks that enabled war crimes, jeopardised the mission, and risked the lives of service members, but also the culture that made accountability almost impossible. Superb.'

'Alpha is an important, infuriating, meticulously researched account of modern warfare that I found nearly impossible to put down.'

-- Jon Krakauer, New York Times bestselling author of Where Men Win Glory and Into the Wild

'New York Times reporter Philipps presents an enthralling, blow-by-blow account of the 2019 court-martial of US Navy SEAL platoon chief Eddie Gallagher for stabbing a wounded ISIS prisoner to death ... This is the definitive portrait of a saga that exposed deep fault lines within an elite fighting force.'

* Publishers Weekly, starred review *
David Philipps is a Pulitzer Prize-winning national correspondent for The New York Times, where he writes about the military and veterans. He has also been a finalist for the Pulitzer twice, and has won a number of other national-level awards, including the Livingston Award and Ford Prize for military reporting.
NGR9781913348526
9781913348526
1913348520
Alpha: a reckoning for the Navy SEALs by David Philipps
David Philipps
New
Paperback
Scribe Publications
20210909
480
N/A
Book picture is for illustrative purposes only, actual binding, cover or edition may vary.
This is a new book - be the first to read this copy. With untouched pages and a perfect binding, your brand new copy is ready to be opened for the first time
Trustpilot