Ruler of the Night David Morrell 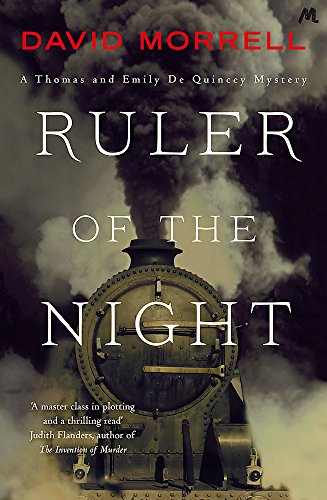 Ruler of the Night by David Morrell

In the third Victorian mystery from prizewinning author David Morrell, the notorious Opium-Eater Thomas De Quincey investigates a truly unprecedented murder - the first to ever take place on the railways.

Ruler of the Night: Thomas and Emily De Quincey 3 by David Morrell

In 1855, the first murder on an English train causes a wave of fear and panic. There is no escape from a killer in a closed train carriage... and yet the killer can vanish into any station and be lost in the crowd.

Notorious Opium-Eater Thomas De Quincy and his irrepressible daughter, Emily, are travelling on the train where the murder takes place. As they follow the clues through the fogbound London streets, they find themselves confronting their most ruthless enemy.

Inspired by real events, Ruler of the Night transports readers to the darkest shadows of Victorian England, with a thrilling tale of murder, Empire and revenge.

Riveting! With this mesmerizing series, David Morrell doesn't just delve into the world of Victorian England - he delves into the heart of evil, pitting one man's opium-skewed brilliance against a society where appearances are everything...and the most vicious killers lurk closer than anyone thinks. -- Lisa Gardner, author of Fear Nothing
Spectacular...The narrative builds to a powerful but bittersweet ending that will leave readers hoping that Morrell eventually chooses to resurrect this superb series. * Publishers Weekly *
Morrell expertly captures in prose the economic and political divisions of Victorian society, but he leavens his social commentary with moments of high adventure. * Kirkus Reviews *
A complex, top-notch mystery, with a large cast of characters and multiple, interwoven plotlines...Philosophical, uncannily perceptive De Quincey competes well with Sherlock Holmes for brilliance despite drug use * Booklist *
A feat of brilliant storytelling * Huffington Post *
A cracking yarn, irresistible as an emergency bottle of laudanum secreted in a shabby coat pocket. Richly detailed and engrossing; Morrell animates the Victorian era and delivers genre thrills with rare style and panache * Kirkus *
Murder as a Fine Art was fantastic, and Inspector of the Dead is even better...Morrell is darkly inventive with the murders and cleverly mines very real history...The author brings each character back to life, and they spring fully formed from the page...I dare you to put this down once you've picked it up! * My Bookish Ways *
Praise for David Morrell * . *
Stellar writing and storytelling...Real historical figures mix with the heroes, and the thriller elements are both terrifying and grotesque. Morrell's impeccable research shines * Herald Tribune *
A gaslit gallop through Victorian London * Financial Times *
A terrific read. As one would expect of Morrell, it is compulsive and thrilling, but its use of de Quincey also allows for discursions that are both funny and touching - de Quincey and his daughter are great additions to the detective stage, and I hope we will have a lot more of them to come. -- Judith Flanders, author of The Invention of Murder
[An] exceptional historical mystery...page-flipping action, taut atmosphere, and multifaceted characters * Booklist *
Shockingly real...Morrell's thorough and erudite research of the people and culture of the British Empire's heyday informs every page. A literary thriller that pushes the envelope of fear * Associated Press *
Masterful...brilliantly plotted....evokes 1854 London with such finesse that you'll hear the hooves clattering on cobblestones * Entertainment Weekly *
Brilliant. Everything works - the horrifying depiction of the murders, the asides explaining the impact of train travel on English society, nail-biting action sequences - making this book an epitome of the intelligent page-turner. * Publishers Weekly *
David Morrell fans - and they are Legion - can look forward to celebrating Murder As a Fine Art as one of their favorite author's strongest and boldest books in years. -- Dan Simmons, author of Drood
The finest thriller writer living today, bar none. * Steve Berry *
A master of suspense....If you're reading Morrell, you're sitting on the edge of your seat. * Michael Connelly *
An absolute master of the thriller * Dean Koontz *
The father of the modern action novel * Vince Flynn *
Nobody does this better than David Morrell * Lee Child *
A titan among thriller writers. * Joseph Finder *
Master storyteller David Morrell . . . thrills us with heart-pounding suspense while tugging at our emotions. * Tess Gerritsen *

David Morrell is best known for his debut 1972 novel First Blood, which would later become the successful Rambo film franchise starring Sylvester Stallone. His numerous international bestsellers include the classic spy trilogy The Brotherhood of the Rose, The Fraternity of the Stone and The League of Night and Fog. An Edgar, Anthony, and Macavity nominee, Morrell is the recipient of three Bram Stoker awards as well as the International Thriller Writers' prestigious Thriller Master award.

GOR009259480
9781473623866
1473623863
Ruler of the Night: Thomas and Emily De Quincey 3 by David Morrell
David Morrell
Victorian De Quincey mysteries
Used - Very Good
Paperback
Hodder & Stoughton
2017-11-28
352
N/A
Book picture is for illustrative purposes only, actual binding, cover or edition may vary.
This is a used book - there is no escaping the fact it has been read by someone else and it will show signs of wear and previous use. Overall we expect it to be in very good condition, but if you are not entirely satisfied please get in touch with us
Trustpilot