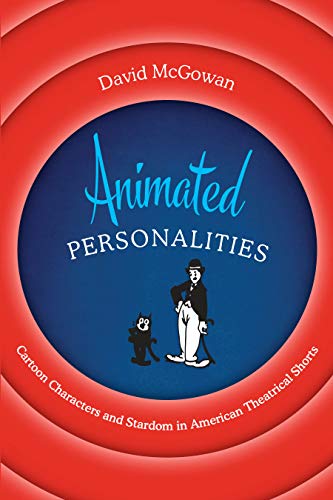 Mickey Mouse, Betty Boop, Donald Duck, Bugs Bunny, Felix the Cat, and other beloved cartoon characters have entertained media audiences for almost a century, outliving the human stars who were once their contemporaries in studio-era Hollywood. In Animated Personalities, David McGowan asserts that iconic American theatrical short cartoon characters should be legitimately regarded as stars, equal to their live-action counterparts, not only because they have enjoyed long careers, but also because their star personas have been created and marketed in ways also used for cinematic celebrities.

Drawing on detailed archival research, McGowan analyzes how Hollywood studios constructed and manipulated the star personas of the animated characters they owned. He shows how cartoon actors frequently kept pace with their human counterparts, granting interviews, allowing candid photographs, endorsing products, and generally behaving as actual actors did-for example, Donald Duck served his country during World War II, and Mickey Mouse was even embroiled in scandal. Challenging the notion that studios needed actors with physical bodies and real off-screen lives to create stars, McGowan demonstrates that media texts have successfully articulated an off-screen existence for animated characters. Following cartoon stars from silent movies to contemporary film and television, this groundbreaking book broadens the scope of star studies to include animation, concluding with provocative questions about the nature of stardom in an age of digitally enhanced filmmaking technologies.

[A] never less than fascinating analysis of the lives of animated actors, separate from their performances...this book excels as a fascinating history of who these celluloid celebrities were. * Austin Chronicle *
[Animated Personalities] is impressive for its lucid historical structure and exceptionally enjoyable content...McGowan breathes life into celluloid figures, giving readers a backstory for some of the most enduring iconic characters of screen history. This is a truly gratifying book. * CHOICE *
[A] meticulous study...McGowan's project stands out as an extensively researched and timely intervention that simultaneously underscores the need to systematically examine the intersections between animation and live-action stardom and provides a useful model for conducting this type of analysis in an engaging, provocative manner. * Celebrity Studies *
McGowan delivers an in-depth, concise and convincing line of reasoning as to why animated characters should be considered star quality, whilst providing exceptional discourse on various aspects of cinematic history...This is a bold and powerful expose on a subject matter that has had an enormous impact on our society extending way beyond the bounds of entertainment. * Leonardo *
Combining historical, formal, and theoretical modes of analysis, Animated Personalities represents a vital contribution to both star studies and the study of animation in classical Hollywood and beyond. By embracing a key problematic of the study of stardom-the inability to take any element of its construction as authentic-McGowan does not undermine the validity of this approach so much as craft a more honest and complete understanding of it. * Synoptique *
More than simply adding animation to the existing scholarship in star studies, McGowan raises important questions and contributes a significant work to the field in the twenty-first-century era of CGI artificiality in modern filmmaking...McGowan's work is an important breakthrough in examinations of stardom. * Journal of Popular Culture *
[McGowan offers] alternative approaches to star studies that reveal insights into how the field can and should develop. * Screen *
[A] tralblazing book...McGowan draws detailed and insightful comparisons between the processes involved in custom building star personas for live-action and animated films. * Studies in American Humor *
David McGowan is a lecturer in animation history at the Savannah College of Art and Design (SCAD). He holds a PhD from Loughborough University in the United Kingdom.
NPB9781477317440
9781477317440
1477317449
Animated Personalities: Cartoon Characters and Stardom in American Theatrical Shorts by David McGowan
David McGowan
New
Paperback
University of Texas Press
20190301
326
Winner of CHOICE Outstanding Academic Title 2019 (United States)
Book picture is for illustrative purposes only, actual binding, cover or edition may vary.
This is a new book - be the first to read this copy. With untouched pages and a perfect binding, your brand new copy is ready to be opened for the first time
Trustpilot