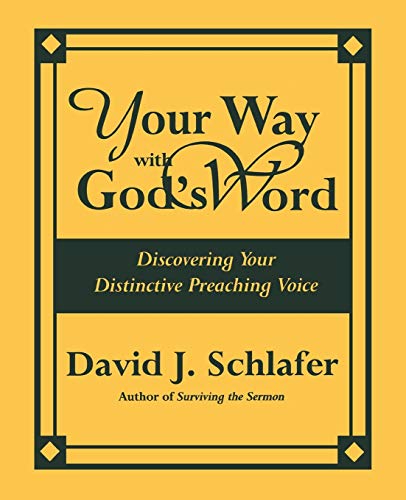 Your Way with God's Word by David J. Schlafer

Schlafer's second book is an adventure in homiletical spirituality and imagination. It leads us through reflection and practical exercises to deepen our self-awareness as preachers.

Your Way with God's Word by David J. Schlafer

Schlafer's book is an adventure in homiletical spirituality and imagination. It leads us through reflection and practical exercises to deepen our self-awareness as preachers. These exercises allow us to discern whether we are poets, storytellers, or essayists; discover our preaching "parents" and mentors, and develop a preaching style that avoids rigidity and self-preoccupation. Developed in workshops and conferences around the country, Your Way with God's Word can also be used in diverse settings and groups, including homiletical workshops, sermon reflection groups in the parish, and preaching colleagues groups. The introduction to the book gives numerous practical suggestions for its use. As a personal preaching resource, this book is also a powerful aid to prayer and spirituality.
As each person's signature is unique, so each preacher, says David Schlafer, has a distinctive preaching voice. This book is about that voice, but voice understood in a broad sense. Voice means more than tone, rate, style, and manner of presentation. It includes one's `preaching parents' (models), special gifts, the context, and the voices to which the preacher has listened. The sermon, according to Schlafer, is a `sacred conversation' in which the preacher orchestrates all the voices that he hears in the Scriptures and the culture. This book intends to guide the reader, through reflection and practical exercises (done either alone or in a group), to a deeper self-awareness of that distinctive preaching voice. -- Erwin J. Kolb * Concordia Pulpit Resources *
Some say preaching can't be taught. There is some truth in that. . . . Learning to preach is a process of self-discovery, and the role of the professor in homiletics is something like mentor, coach, facilitator, and counselor. . . . Schlafer is well acquainted with the reticence prevaling among seasoned preachers to look critically at their own sermons and their own pulpit selves. He recognizes as well the trepidation of theological students confronting the teaching task for the first time. He knows how to guide preachers through these apprehensions. . . . "I confess that I was among the reticent and the skeptical. Then I realized that license to speak about the book cannot come from merely reading it in preparation for describing its contents. So I entered my own homiletical self-inquiry. After a short time in the process, I was completely engaged, and at its end, I felt refreshed, challenged, and cared for. This is a unique kind of writing of value to all those who want to look critically and creatively at their preaching and at themselves as preachers. It is also a worthy starting point for any group of preachers who are ready to brave mutual conversation, insight, and growth. -- William Hethcock * Virginia Seminary Journal *
David Schlafer will already be a familiar name to readers. . . . For the uninitiated who have not yet had the pleasure of listening to him, he is an Episcopal priest with a passion for preaching and the gift of being able to explore its theological dimensions with pastoral sensitivity and intellectual subtlety. . . . "This is a book to plunder then and to ponder. . . ; In some important respects the book is as much about good liturgy and the cultivation of the imagination as about pertinent preaching. It should be kept close to the desk rather than on the book shelves and consulted when (but preferably before) our wells run dry. Recommended. -- Rod Garner * The College Of Preachers: The Journal *
DAVID J. SCHLAFER is an Episcopal priest who has taught preaching at Nashotah House, Seabury-Western, the University of the South, Virginia Theological Seminary, and the College of Preachers. His previous books are Surviving the Sermon, Your Way with God's Word, and What Makes This Day Different? Schlafer conducts seminars and workshops on homiletics in the United States, Canada, and England.
GOR003131968
9781561011186
1561011185
Your Way with God's Word by David J. Schlafer
David J. Schlafer
Used - Very Good
Paperback
Rowman & Littlefield
1995-01-25
142
N/A
Book picture is for illustrative purposes only, actual binding, cover or edition may vary.
This is a used book - there is no escaping the fact it has been read by someone else and it will show signs of wear and previous use. Overall we expect it to be in very good condition, but if you are not entirely satisfied please get in touch with us
Trustpilot