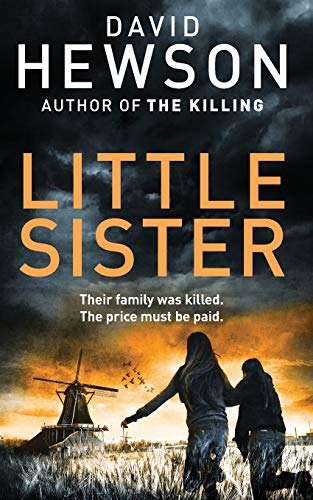 Little Sister is the third title in the Detective Pieter Vos series, David Hewson's atmospheric crime novels set in the city of canals and coffee shops.

Her death will haunt us forever. Now the price must be paid.

Kim and Mia Timmers were just eleven years old when their family was killed. The sisters were accused of murdering the lead singer of a world-famous pop band in the Dutch fishing village of Volendam, believing him to be responsible for their family's deaths. The evidence seemed irrefutable at the time and the sisters were imprisoned in Marken, a local psychiatric institution. Now, ten years later, they are due for release.

Pieter Vos, a detective with the Amsterdam police, is given cause to re-open the case when the girls disappear along with the nurse responsible for escorting them to a halfway house. When the nurse's corpse washes up on the beach at Marken, it becomes apparent that the institution holds the key to the investigation. And it seems that Vos's boss, De Groot, has something to hide which is relevant to the case.

Then, the case takes an unexpected turn when it becomes clear that someone is posing as Little Jo - Kim and Mia's other sister - who was supposedly murdered along with their parents ten years ago . . .

Dark and atmospheric with breathless pacing -- Linwood Barclay
David Hewson was born in Yorkshire in 1953. He has worked for The Times, Independent and Sunday Times as a journalist, and has written numerous novels, as well as several travel books. David Hewson's European crime and mystery books range from the Copenhagen of The Killing and Sarah Lund to the Italy of Nic Costa and the Amsterdam of Pieter Vos. David lives in Kent.
GOR011149282
9781447293408
1447293401
Little Sister by David Hewson
David Hewson
Detective Pieter Vos
Used - Like New
Paperback
Pan Macmillan
2016-09-08
448
N/A
Book picture is for illustrative purposes only, actual binding, cover or edition may vary.
The book has been read, but looks new. The book cover has no visible wear, and the dust jacket is included if applicable. No missing or damaged pages, no tears, possible very minimal creasing, no underlining or highlighting of text, and no writing in the margins
Trustpilot