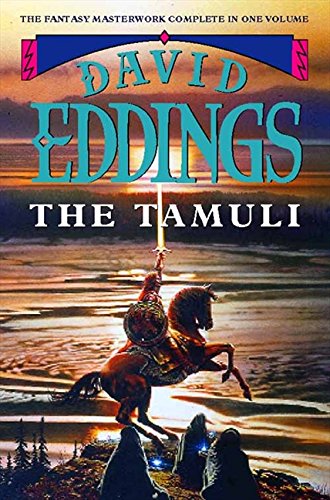 The Tamuli Omnibus by David Eddings

The fantasy masterwork complete in one volume - 1456 magnificent pages: DOMES OF FIRE THE SHINING ONES THE HIDDEN CITY

The Tamuli Omnibus by David Eddings

The fantasy masterwork complete in one volume - 1456 magnificent pages: DOMES OF FIRE THE SHINING ONES THE HIDDEN CITY

Prince Sparhawk and Queen Ehlana are married and their union is blessed with a very special daughter named Danae. But in the Tamul Empire far to the east, unrest of paranormal origin is brewing. The pre-eminent Styric magician Zalasta suggests that the Empire look to the legendary warrior Sparhawk for help.

Trolls despoil Atan in the North, and vampires, werewolves, zombies, ghouls and Ogres form a vast conspiracy to take over the Empire. Most disturbing of all are reported sightings of Shining Ones among the hordes. These luminous beings inspire more fear than the rest combined.

While Sparhawk resurrects the Blue Rose and battles the enemies of the empire, Queen Ehlana is taken, captive, to the Hidden City of the Cyrgai. The City is protected by magic and by the invincible Klael. The ultimate battle must be fought.

This spectacular trilogy is fantasy at its best.

Born in Washington State in 1931, David Eddings grew up near Seattle. He graduated from the University of Washington and went on to serve in the US Army. Subsequently he worked as a buyer for the Boeing company and taught college-level English. His first novel was a contemporary adventure, but he soon began a spectacular career as a fantasy writer with his series The Belgariad. He consolidated his success with two further popular series, The Malloreon and The Elenium.

GOR001327104
9780006483847
0006483844
The Tamuli Omnibus by David Eddings
David Eddings
Used - Very Good
Paperback
HarperCollins Publishers
1999-07-05
1462
N/A
Book picture is for illustrative purposes only, actual binding, cover or edition may vary.
This is a used book - there is no escaping the fact it has been read by someone else and it will show signs of wear and previous use. Overall we expect it to be in very good condition, but if you are not entirely satisfied please get in touch with us
Trustpilot