The Shining Ones David Eddings 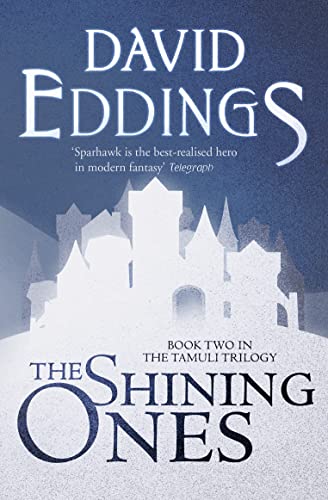 The Shining Ones by David Eddings

The Shining Ones (The Tamuli Trilogy, Book 2) by David Eddings

Sparhawk and Queen Ehlana must do everything they can to educate Tamuli Emperor Sarabian in the art of leadership if they are to have any chance of standing against the evil forces that threaten their kingdoms.

Sarabian's enemies are regrouping and once again plan to attempt to take the empire for themselves.

But more disturbing than the political machinations of court, there have been reported sightings of Shining Ones among the hordes of monsters roaming the land. If Sparhawk and his allies are to have any hope of defeating this growing threat they must resurrect the sacred jewel of the Troll-Gods, otherwise the fate of not just their kingdoms, but the entire world, will be at stake . . .

'Sparhawk is the best-realized hero in fantasy' Daily Telegraph

GOR011280337
9780007579013
0007579012
The Shining Ones (The Tamuli Trilogy, Book 2) by David Eddings
David Eddings
The Tamuli Trilogy
Used - Like New
Paperback
HarperCollins Publishers
2015-09-10
608
N/A
Book picture is for illustrative purposes only, actual binding, cover or edition may vary.
The book has been read, but looks new. The book cover has no visible wear, and the dust jacket is included if applicable. No missing or damaged pages, no tears, possible very minimal creasing, no underlining or highlighting of text, and no writing in the margins
Trustpilot